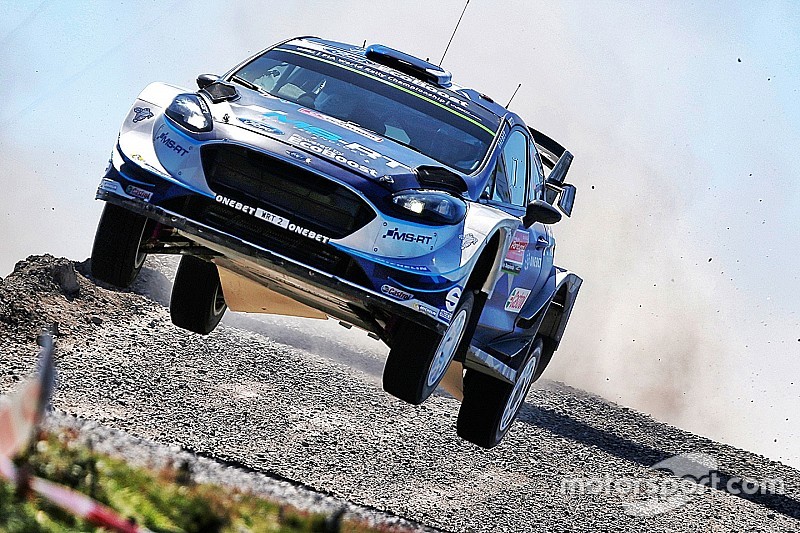 Ott Tanak takes a 4.6-second lead into day two of the Rally of Portugal after a wild second half of the opening leg.

M-Sport Ford driver Tanak hit the front for the first time on the second stage of the afternoon, by just 0.1s over Jari-Matti Latvala's Toyota at that point.

Despite causing slight damage to his Fiesta on that stage, Tanak stayed at the front for the rest of the day as a multitude of dramas scattered what had been an eight-strong lead group after six stages of the rally.

Latvala rolled at the start of SS7 and limped through the remainder of that stage and the double run of the Braga street course in 'road mode' in a battered Yaris, dropping nearly five minutes and falling to 13th.

Kris Meeke, who had led ahead of Latvala and Tanak immediately after midday service before falling to fifth when he conserved tyres on SS6, picked up a puncture on SS7 and then stopped for good further along the stage with broken suspension.

Hayden Paddon hit trouble on the same stage, an intermittent electrical glitch that had already dropped him from first to sixth in the morning causing even greater disruption just as he had recovered to a close third.

This time he was parked for nearly 11 minutes before the car would restart and he ended the day outside the overall top 20.

All that meant Dani Sordo came through to second at the end of the day, 4.6s off Tanak and just 0.4s ahead of Sebastien Ogier.

Reigning World Rally champion Ogier had been as low as eighth while running first on the dusty road through leg one but closed in on Sordo by winning the first pass through Braga.

Craig Breen coped with a broken damper on his Citroen to end the day fourth ahead of Elfyn Evans, the Welshman delayed slightly by a morning puncture.

Thierry Neuville is presently sixth, but expects to be higher up by the morning

He felt he lost around 20s trapped behind Latvala's slow-moving Toyota after its SS7 crash and expects to have his time adjusted from his current position 22.7s off Tanak.

The attrition has moved Toyota's Juho Hanninen and Esapekka Lappi up to seventh and eighth, the latter slowed with a loss of power from a holed intercooler through Friday's final stages.

Mads Ostberg was in the top 10 until dropping three minutes changing a puncture on SS5.

Extremely dispirited at first, he closed the day by winning the second run around Braga and is 10th overnight behind dominant WRC2 leader Andreas Mikkelsen.