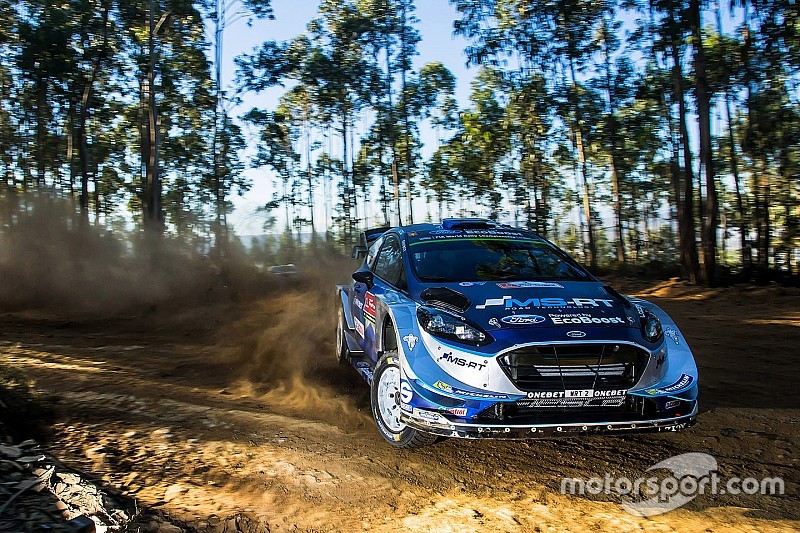 The ultra-close Rally of Portugal lead battle was blown apart on the final full-length stage of Friday when key protagonists Jari-Matti Latvala, Kris Meeke and Hayden Paddon had their victory bids jeopardised.

The top eight in round six of the 2017 World Rally Championship went onto the Ponte de Lima stage covered by just 8.9 seconds, with Ott Tanak holding a tiny 0.1s lead over Latvala.

Toyota driver Latvala was first to hit trouble when he felt "something changed" with the car under braking for the second corner.

He hit a bank and rolled, doing damage that left him limping through the rest of the stage in 'road mode' and losing nearly five minutes.

Meeke had taken the lead on the first stage of the afternoon, then fell from first to fifth when he took SS6 gently to conserve tyres with the intention of pushing on Ponte de Lima.

But his charge was shortlived as he first had to stop to change a puncture, then parked for good with suspension damage.

Paddon had moved up to third with rapid times on the loop's first two stages, but his Hyundai - which had lost the lead in the morning when it cut out unexpectedly - stopped with a mechanical problem while setting the pace on split times.

With radio assistance from Hyundai, Paddon managed to get the car going again after a 10-minute delay.

That meant Tanak held onto the lead despite having "bent something" on his M-Sport Ford in an impact on the previous stage.

Dani Sordo and Sebastien Ogier are second and third, with Craig Breen fourth and still within 10.8s of the lead despite breaking a damper on the chaotic SS7.

Thierry Neuville is fifth behind Elfyn Evans but will appeal for an adjusted time as he felt he lost at least 20s behind the slow-moving Latvala. Neuville is 23.4s off the lead.