Rally duo unhurt after car somersaults into lake and sinks 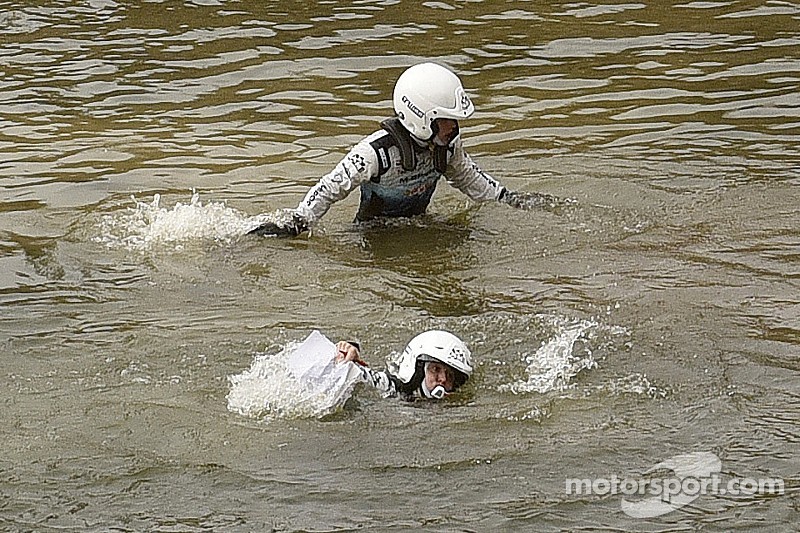 Ott Tanak’s car sinks to the bottom after scary crash, but both he and co-driver manage to swim to safety.

Ott Tanak and co-driver Raigo Molder are uninjured but “shocked” and “damp” according to M-Sport team boss Malcolm Wilson after their Ford Fiesta crashed into a lake on the opening morning of Rally Mexico.

WRC young gun Tanak left the road just a couple of kilometres into the first stage of the morning and rolled into the lake at the side of the road.

Fears about the crew only became apparent when drivers at the end of the stage, who were running after the Estonian, said they hadn’t seen his car.

The stage was stopped long after the crash had actually happened, as nobody had been able to raise the alarm, but fortunately both driver and co-driver managed to extricate themselves from the car before it sank and swim to safety.

“It’s a relief for everyone here to know that they’re OK,” said Wilson. “Nobody really knew what had happened, we could see on the tracking [system] that it was 2.6km [into the stage] and when we waited for the first car, Kris Meeke, he said he hadn’t seen them. So then we alerted the organisers who sent a helicopter to try and locate them, but they couldn’t be seen anywhere.

“When we looked at the map, we saw where they had stopped was right beside the lake, or reservoir or whatever it was, and then you really start to fear the worst.

“The organisers stopped the stage and sent a car from the start of the stage, and they were able to locate the boys, who were out of the car, which was a massive relief.

“We’ve sent them back to the hotel, they’re a little bit damp! They’re too shocked to really talk about what happened, so we’ll sit down with them this afternoon and get to the bottom of what actually happened.

When asked if he knew anything about the state of the car, Wilson replied: “Put it this way, the car is not visible so I think that gives you an indication of how deep it is. So we’ll try and retrieve the car.”