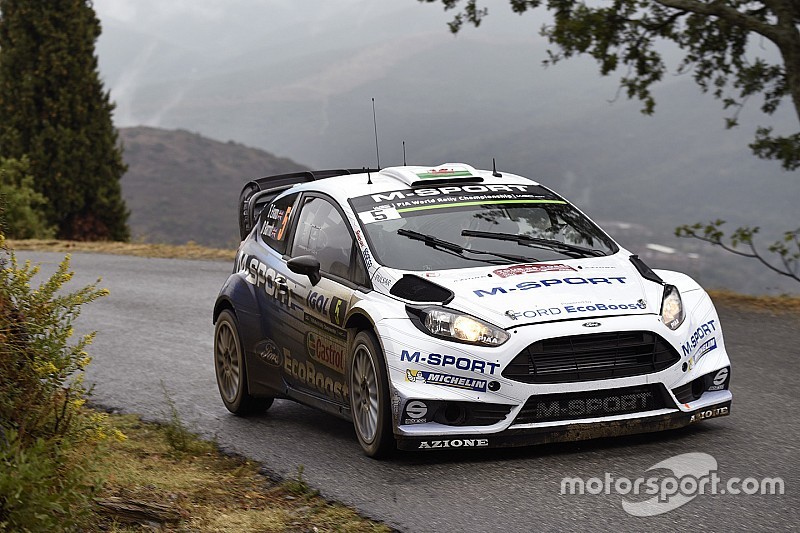 M-Sport's Elfyn Evans ended the interrupted first day of the 2015 Tour de Corse as the rally leader, with champion Sebastien Ogier picking up a puncture.

Torrential rain in Corsica had led to the cancellation of SS2, but despite talk of an early end to the day, the third and final stage - the 36.43km Sermano - did take place, albeit after a significant delay.

First on the road, Ogier, who had retaken his title in Australia, found superb pace early on in SS3, going almost half a second clear of his VW teammates after the first two splits.

However, he picked up a slow puncture and lost a minute and a half changing his rear-left tyre.

"I knew it was going to be a lottery, with the mud and the rocks," the Frenchman said. "I didn't feel anything, but it was a slow puncture and we had to stop."

With Ogier on the back foot, it was Evans' turn to star, the Ford driver topping the stage and establishing a solid lead in the overall classification.

"It didn't feel great, to be honest," the Welshman said after his run. "I told Dan [Barritt, co-driver] I didn't think it's a great time and I didn't feel I was carrying great speed."

Latvala and Mikkelsen were half a second off Evans through SS3, the former admitting he took it "very carefully" and the latter complaining of brake issues.

Instead, it was Hyundai's Kevin Abbring who was closest to Evans throughout the stage, finishing 10 seconds adrift to move up to second overall.

Kris Meeke, Bryan Bouffier and Ogier completed the top 10, while Hyundai's Dani Sordo was another victim of a puncture, losing two minutes after hitting a rock.