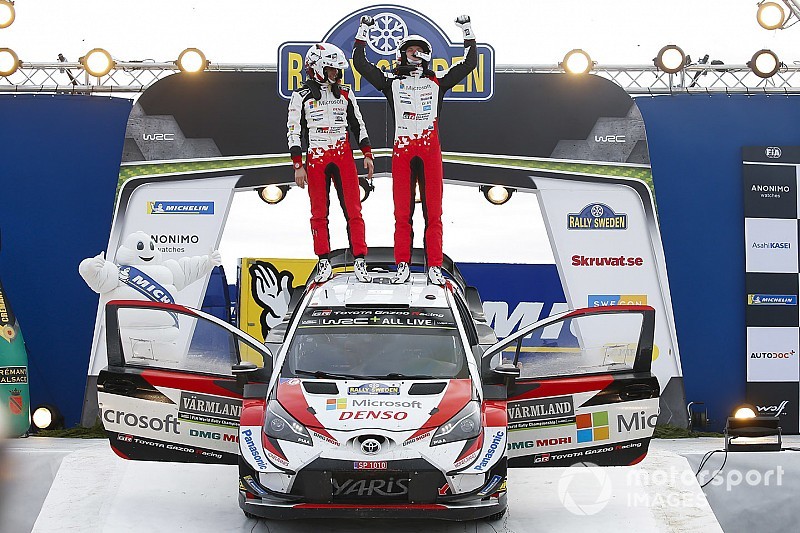 Ott Tanak sealed Rally Sweden victory after taking a dominant win on the Power Stage, vaulting into the lead of the WRC standings.

But the Estonian was in no mood to cruise to victory, winning the final test of the rally by 3.5s ahead of nearest rival Thierry Neuville - securing the maximum available score of 30 points.

Tanak therefore moves into a seven-point lead in the championship standings ahead of Hyundai's Neuville.

"It's amazing to win here," said Tanak. "I know how hard my friend Markko [Martin, Tanak's fellow Estonian] was pushing and he got very close. I'm very relieved to get it.

"On the Power Stage I just went with a good rhythm again - just a bit faster than normal but no risks. It was a good stage."

Esapekka Lappi, Neuville and Andreas Mikkelsen began the stage split by less than 10 seconds in the fight for second place behind Tanak, with Lappi and Neuville separated by only 4.4s.

Citroen driver Lappi looked in danger of dropping behind Neuville after dropping time early on, but he managed to end strongly and drop only one second, allowing him to keep the runner-up spot.

Mikkelsen was a disappointing ninth on the Power Stage, but the Hyundai driver narrowly kept fourth place overall ahead of Elfyn Evans, who was third-fastest in his M-Sport Ford.

Citroen pair Sebastien Ogier - who was ruled out of contention after hitting a snowbank on Friday - and Lappi completed the scorers on the Power Stage, Ogier taking the fourth-best time despite being among the first runners.

Sweden WRC: Tanak on brink of win, Mikkelsen drops back