Sébastien Loeb kicks off the 2015 season at Rallye Monte-Carlo! 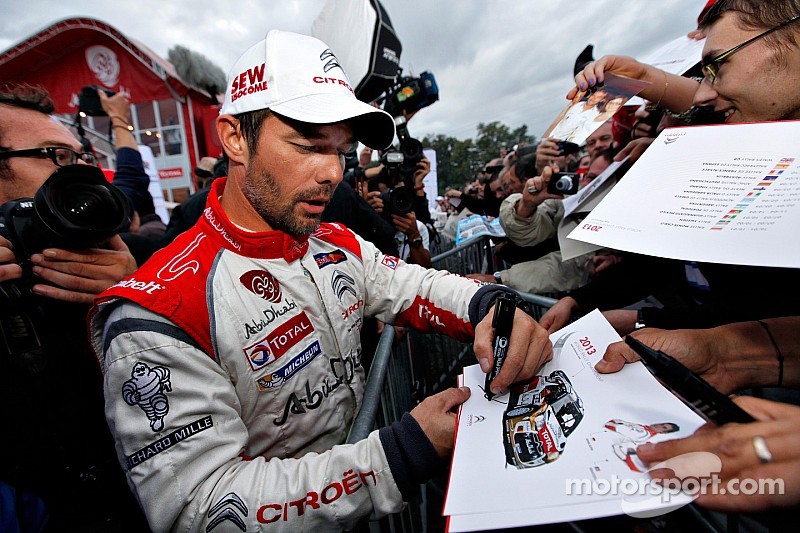 It’s the big story of the opening round of the 2015 season: Sébastien Loeb and Daniel Elena will be competing at the Rallye Monte-Carlo in a DS 3 WRC.

New season, new colours… and the return of two familiar faces! Sébastien Loeb and Daniel Elena return to action in a DS 3 WRC to contest the Rallye Monte-Carlo. The legendary crew, winners of nine world titles and 78 rallies (including seven wins in Monaco), is set to cause a stir with the Citroën Total Abu Dhabi World Rally Team.

To start the new season, several significant upgrades have been made to all three of the DS 3 WRCs entered: engine, suspension, aerodynamics, gearbox, etc. “The DS 3 WRC is a very accomplished car, but we have worked hard to make it even more competitive,” commented Xavier Mestelan-Pinon, Citroën Racing’s Technical Director. “For example, we have focussed our efforts on the engine so that it delivers more power and torque, whilst also improving reliability.

Taking advantage of the changes in the regulations, we have reintroduced steering wheel-mounted paddles for the gear changes. Other significant improvements have been made to the aerodynamics, with a new spoiler and a new front end that will be introduced shortly, as well as to the weight distribution with the use of lighter parts. Lastly, we have altered the kinematics of the rear suspension. Work is ong oing and, in the next few months, we will be presenting another aerodynamic upgrade.”

The sporting regulations have also been changed for 2015. At each event, the running order for the crews will mirror the championship standings on the Friday and Saturday. On the final day, the reverse order of the overall rally standings (for P1 and P2 drivers) will be used. In Rally2 (rejoining the rally after a retirement), the penalty applied has been increased from 5 to 7 minutes for each stage missed. And the cars allowed to rejoin will be first on the road. Another important point: it is now forbidden to relay information and split times to the crews during the stages.

An important round for Citroën Racing

The Rallye Monte-Carlo opens the new World Rally Championship season. A legendary round – which reaches beyond the confines of the world of motorsport – the Monaco-based rally is a special event in the WRC.

With the DS in the 1950s and 1960s, then the Xsara, C4 and DS 3 in more recent times, Citroën Racing has one of the best competitive records at the event. As regards Sébastien Loeb and Daniel Elena, they hold the record number of wins here, with seven victories between 2003 and 2013! Third in the World Touring Car Championship (WTCC) in 2014, Sébastien Loeb returns to WRC after more than a year away from world rallying. Still accompanied by co-driver Daniel Elena, the French ace didn’t hesitate for a second when Yves Matton offered him the chance to drive the DS 3 WRC again.

The most famous driver/co-driver pair in the history of rallying will be competing to score points for the Citroën Total Abu Dhabi World Rally Team alongside Kris Meeke and Paul Nagle. The Northern Irishman will be taking part in his seventh Monte-Carlo… but only his second in a WRC. However, his lack of experience didn’t prevent him from grabbing a podium spot in 2014 with the DS 3 WRC!

Competing at all rounds on the 2015 calendar, Mads Østberg and Jonas Andersson will be behind the wheel of the third DS 3 WRC between Gap and Monaco. The Norwegian has only started this event on two previous occasions: he was sixth in 2013 and fourth last year, just behind his team-mate!

Former winners of the Citroën Top Driver series and among the leading crews in the FIA WRC2 Championship last year in a DS 3 R5, Sébastien Chardonnet and Thibault de la Haye will be competing in the opening round of the season in a privately-backed DS 3 WRC.

Stéphane Lefebvre, the 2014 FIA Junior WRC champion, will this year be competing in the FIA WRC2 Championship in a DS 3 R5, alongside co-driver Stéphane Prévot. In total, three DS 3 R5s are competing in this category.

Yves Matton (Citroën Racing Team Principal): “Monte-Carlo is a very important rally for Citroën Racing. The context at the start of the season, with the one-off return of Sébastien Loeb and Daniel Elena, makes it all the more special! We know that they will come under great scrutiny and that just the fact of being here will cause a stir. For the entire team, this first round has been eagerly awaited. We’ll get to see the results of several months of work.

The DS 3 WRCs have been upgraded with the aim of increasing performance. Our rivals have undoubtedly made improvements too, so we have to manage to remain competitive. Our aim is to remain among the best and the efforts of the team, its experience, the return of Sébastien Loeb and the progress made by Kris Meeke and Mads Østberg are our strengths.”

Sébastien Loeb: “When Citroën Racing offered me the chance to take part in this rally, it didn‘t take long to decide! Monte-Carlo is held on French roads. I love the atmosphere and how close we get to our supporters. I’m also happy to get that special feeling back in the DS 3 WRC! On the first day of testing, I had to get back into the swing of things, but it all came back to me pretty quickly! The driving style is very different to what I have become used to with the C-Elysée WTCC.

With four-wheel drive and normal roads, you have to improvise a lot more. These tests were useful, but it is always difficult to prepare for a Rallye Monte-Carlo. You can’t predict what the conditions will be like on the day. My aim is to be competitive, but we have to remember that I haven’t driven in a rally at this level for over a year. Ever y time I start a race, I give it my best shot. It’ll be no different this time and if we can fight for the win, so much the better!”

Kris Meeke: “I’m happy to start a new year with the Citroën Total Abu Dhabi World Rally Team. In 2014, I was experiencing the vast majority of the rallies on the calendar for the first time. I learned a lot and I realised just how important it is to rack up the miles and experience. Generally speaking, all drivers make progress in their second full season and I hope I’m no exception to the rule. I also think that the work done on the DS 3 WRC is going to help us to go even faster.

Citroën Racing has always enjoyed great results at Monte and the team has extensive experience of the event. And although it’s impossible to predict what’ll happen at this rally, being able to count on a team like this is obviously a big advantage. My goal is to fight for one of the leading places.”

Mads Østberg: “I felt good at the end of the 2014 season. Continuing with the Citroën Total Abu Dhabi World Rally Team is very positive. I learned a lot last year with a new car and a new team. And although it’s always difficult to set goals at the start of the year, I want to keep improving. I am going to take each race as it comes and I hope that this approach will pay dividends. Monte-Carlo is potentially the most difficult rally of the year.

Depending on the conditions, you can have dry tarmac, wet tarmac, shiny ‘black top’ tarmac, ice and snow… and sometimes all with the same tyres! It can be a big challenge. In order to have a good Monte-Carlo, you need to make the right tyre choices, have good pace notes, good gravel crews and the right team!”

Stéphane Lefebvre: “It’s a brand new challenge for me. In a four-wheel drive car, everything goes more quickly. During the off season, I started working on adapting my pace notes to this new speed with Stéphane Prévot. The end of my 2014 season, with two races in a DS 3 R5, meant that I have been able to hit the ground running a little bit in this learning process. I’m ready for Monte-Carlo. I have taken part in this rally once before, but the route was different. I feel that I have great support from Citroën Racing, the PH Sport team, Stéphane Prévot alongside me in the car and Alexandre Bengué as my gravel crew driver. It’s now up to me to make the most of all these assets to be competitive.”

Romain Dumas, a special 1970 edition of the Monte-Carlo !