It was a Norwegian celebration in Sweden today, as Petter Solberg, the rallycross and rally veteran from across the border, clinched the victory for Subaru in the Swedish Rally, the second event in the 2005 World Rally Championship. Winner ...

It was a Norwegian celebration in Sweden today, as Petter Solberg, the rallycross and rally veteran from across the border, clinched the victory for Subaru in the Swedish Rally, the second event in the 2005 World Rally Championship. 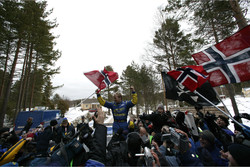 Winner Petter Solberg celebrates.
Photo by Subaru World Rally Team.
"It's a great feeling, like a big dream, I almost can't believe it's true," said Solberg at the finish. "This rally is so special but has been tough for me in the past, and now this year it's just gone perfectly."

Indeed, this is as close to a "home" rally as it gets for Solberg. As there is no WRC event in Norway, his fans flock over the border to Sweden to cheer on their hero.

"We made no mistakes all really -- not in the car, or in the team, or anywhere -- it just all came into place so well," Solberg continued. "There are so many people to thank, everyone from Phil Mills, to the guys who work on my car, to Pirelli who have built such an incredible tyre, and the supporters out on the stages who cheered us along."

Solberg took over the lead from Peugeot's Marcus Gronholm on Saturday, and never looked back, gradually building on that lead, stage by stage, and adding cushioning to his margin over Gronholm and 2004 WRC champion Sebastien Loeb as the final day progressed.

By the end of SS15, Solberg was 13 seconds clear of Gronholm, and held a lead of over 48 seconds over then third-placed Loeb, whose Citroen was uncharacteristically suffering from engine problems. And things got easier after that.

On SS16, the 23 km long Rammen stage, the sump guard on Gronholm's Peugeot 307 WRC caught the road surface and the Finn's car drifted off the line, spinning off the road and rolling onto its roof. Gronholm and copilot Timo Rautiainen got the car going again, but they had to abandon the stage after another 4 km due to heavy damage to the left front wheel.

"Same thing as in Australia last year," Gronholm explained in an interview with Finnish news agency STT, referring to the spin he had in the 2004 Rally Australia when the sump guard also caught on the ground.

"Of course we're upset," the Finnish ace continued. "But if we don't drive at this kind of speed, we can't win anything, either. We could have been third, fourth or fifth, but we're here to win."

Loeb, unlike Gronholm, was driving cautiously, trying to make his engine last, in spite of the engine cooling problem that reared its ugly head on Saturday. It wasn't to be enough, though, and the engine in the Frenchman's Xsara WRC seized on the road section just before the penultimate stage of the rally.

"It's very frustrating, when you are in a good position with just two stages to go and you can't do anything," Loeb recounted after his retirement. "We did our best. Now we have to overcome this setback."

To make things worse for Citroen, Francois Duval, who had been battling for fourth place with Markko Martin, suffered three punctures, and the third time he was forced to replace a wheel as the run-flat foam leaked out of the broken wheel.

"The 'Lejen' stage (SS11) is not good to us," the Belgian explained. "Last year, we went off there. This year one of the many stones on the test ruined our chances. I never saw a Swedish Rally like this one: usually, you are sliding along".

Duval dropped back to 15th, but clawed his way back to 12th place by the finish to score a single manufacturers' championship point for Citroen as the eighth nominated driver.

With the exits of Loeb and Gronholm, second fell into the lap of Martin, the Estonian having taken a more cautious approach to the rally than his Peugeot teammate Gronholm. Still learning about the 307 WRC, Martin was thrilled to be on the middle step of the podium, even at 2:11 off Solberg's pace.

"I am a little surprised to finish second here!" the Peugeot pilot expressed. "I learned a lot about the setup of my car and about the new Pirelli tyres. I was very pleased by their performance -- they were very fast and retained the studs extremely well despite the difficult and gravely road conditions."

Ford driver Toni Gardemeister, also new to his team this year, not only claimed third place in the Focus RS WRC04, but also took over the WRC championship points lead, certainly a position that the young Finn never expected to be holding after the first two rallies of 2005.

"Absolutely fantastic!" Gardemeister exclaimed after taking the final podium position, a minute adrift of Martin. "To be leading both world championships is a superb situation for both myself and Ford. I've never been in this position before."

"My pace wasn't so good on the first day but I've felt much more comfortable since and gained a lot more confidence in the car," the 29-year-old Ford pilot explained. " We took no risks but just kept to a speed with which I felt happy. We had some luck with the retirement of drivers ahead of us, but the Focus is a strong car and while others had problems, we didn't."

Mitsubishi pilot Harri Rovanpera took fourth, 12 seconds behind Gardemeister, followed by Henning Solberg (Ford) and Daniel Carlsson (Peugeot) who was the top Swede in the rally.

The top positions were dominated by Northern European drivers -- the two Solbergs from Norway, Carlsson from Sweden, Martin from Estonia, and Gardemeister and Rovanpera from Finland -- no surprise given the wintry conditions. Gianluigi Galli in 7th and Roman Kresta in 8th were the first southerners at the finish.

Heading to Mexico next, the 2005 championship standings bear little resemblance to most expectations, with Gardemeister leading Martin by a single point, and Loeb and Solberg tied for third with 10 points -- and one victory -- each.