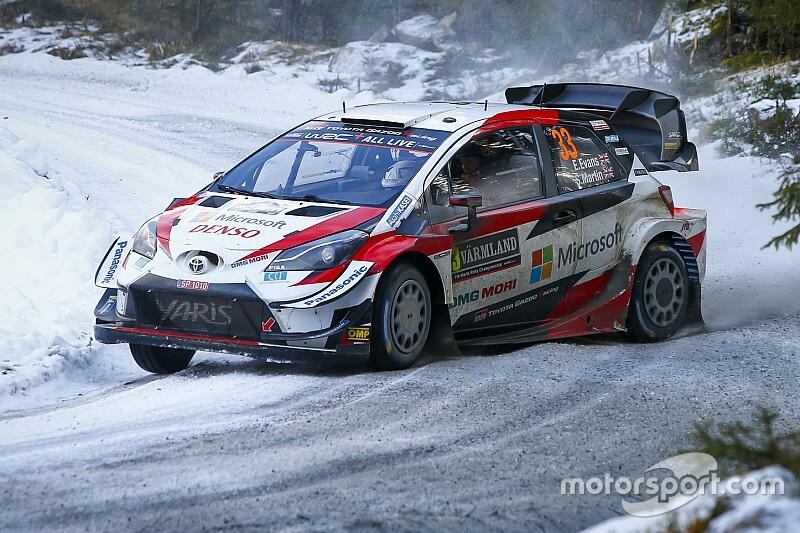 Toyota's Elfyn Evans is closing in on his second WRC win as he leads Rally Sweden by 17.2 seconds to Ott Tanak.

Evans set the fastest time in all three of Saturday morning’s stages and although he was only fourth on the afternoon’s Torsby Sprint stage, he beat reigning world champion Tanak to extend his advantage yet further over the Hyundai driver.

If Evans stays ahead on Sunday, it will be the Welshman’s first victory since Rally GB in 2017 - where he triumphed with the M-Sport team.

Sebastien Ogier and Kalle Rovanpera’s rally-long battle for the final podium spot continued on Saturday afternoon’s stage with Ogier slipping ahead of the youngster once again.

The Toyota drivers swapped positions throughout the morning and Ogier holds only half-a-second's advantage over Rovanpera.

M-Sport’s Esapekka Lappi lost a small amount of time to Thierry Neuville as the Belgian snatched the stage win, but maintains a 4.5s lead over the Hyundai driver.

Craig Breen (Hyundai) and Teemu Suninen (M-Sport) remain in seventh and eighth after the short but muddy spectator stage.

The cars remained on studded tyres despite the lack of snow on the stage due to the unusually warm weather conditions.

Sunday will contain only one stage, the Likenas Power Stage, with the first running of the stage cancelled in order to preserve the increasingly muddy road.