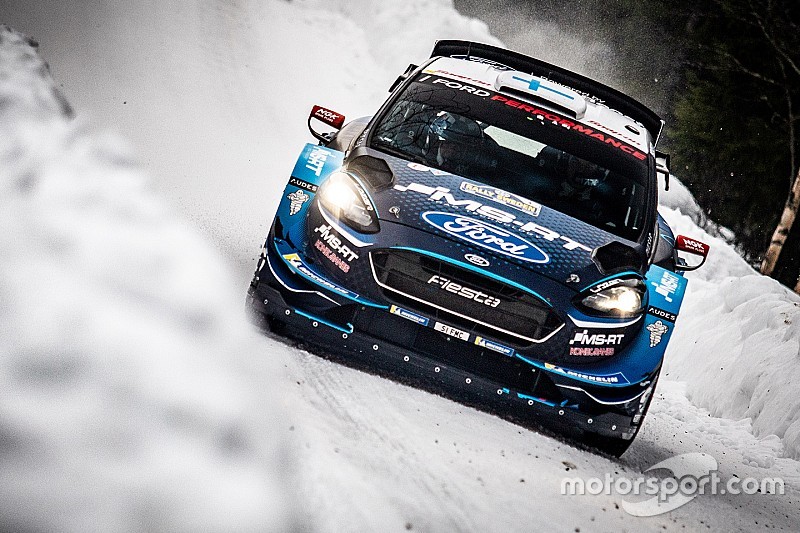 Toyota driver Ott Tanak leads Rally Sweden by over half a minute, as his main rival for World Rally Championship victory Teemu Suninen went off into a snowbank and lost over a minute.

Tanak took the lead from Suninen by going 3.8s faster on the morning’s first stage, Rammen. That gap was set to increase further on Hagfors but Suninen’s victory challenge ended before the stage was over.

Carrying too much speed into a slow left turn in the technical section late on the Hagfors test, Suninen's M-Sport Ford Fiesta understeered wide into a snowbank, requiring one minute and a half to get back on the road with the help of nearby spectators.

Tanak now holds a lead of 33.8s over second-placed Andreas Mikkelsen, with Suninen dropping down to eighth place.

Mikkelsen had a quiet run throughout the morning but built his advantage over Elfyn Evans further, as the Welshman struggled for pace and now has only 1.1s in hand over Thierry Neuville.

Starting the day in seventh, Neuville rose up the order despite complaining of understeer aboard his Hyundai i20, initially falling behind Kris Meeke but rebounding to pass the Northern Irishman on Hagfors and then Lappi on the Vargasen test, inheriting fourth with Suninen’s delay.

Lappi was still lacking confidence after a spectacular spin on Friday that nearly rolled his Citroen C3 but remained within touching distance of third place, one second behind Neuville and 2.1s off Evans. Sixth-placed Meeke is also in the podium hunt, only 8.1s adrift of Evans.

Hyundai’s third driver Sebastien Loeb struggled for pace, admitting he had been to conservative with his pace notes during the recce. He is now falling adrift of the podium battle, 16.3s behind Meeke in seventh.

A recovering Suninen was third-quickest on Vargasen, the next stage after his off on Hagfors, and is now only nine seconds behind Loeb in eighth. His M-Sport teammate Pontus Tidemand remains in a lonely ninth position.

Sebastien Ogier returned under Rally2 rules following his retirement on Friday, when he became stuck in a snowbank. He set the fastest stage times through both Hagfors and Vargasen, while fellow returnee Jari-Matti Latvala, who had been battling for the lead with Tanak and Suninen until crashing out on Torsby, won the Rammen stage.

Ogier has "nothing to play for" after Sweden crash