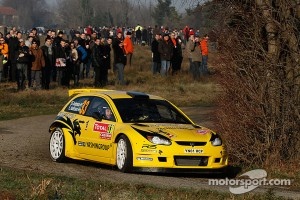 PROTON enjoyed an inspiring start to its 2012 FIA Super World Rally Championship (S-WRC) campaign by rallying into the top 10 at the end of the first four special stages at the Monte Carlo Rally.

Driver Per Gunnar Andersson paced the Satria Neo S2000 sensibly to finish the drama-riddled day 1 of the rally which saw several of the World Rally Championship frontrunners retiring or suffering major setbacks.

Citroen’s Sebastien Loeb inherited the lead at the Monte Carlo rally after pace setter Jari-Matti Latvala rolled his Ford into retirement. Loeb holds more than a minute’s lead over Spaniard Dani Sordo who damaged the suspension of his Mini, followed by Petter Solberg in the Ford in third while Sebastien Ogier in the S2000 Skoda is fourth.

PROTON too was caught up in the day’s drama when Italian driver Giandomenico Basso’s charge into a sixth gear corner at the opening special stage was blinded by the sun sending him crashing into a wall and forced into an early retirement.

Andersson will start the second leg of the Monte Carlo rally with a four-minute advantage over SWRC rival Craig Breen in the Ford Fiesta.

“The car was fantastic throughout the day, definitely stronger and a lot quicker than the package we had last season, but the goal will be to drive sensibly to make sure that we finish in Monte Carlo,” said a delighted Andersson.

“In Monte Carlo it is crucial for the tyres to have a better grip in the icy weather and wet conditions. This means we have to be a bit more cautious on the throttle and acceleration not to mention that braking can also be very tricky. What is most important is you have to feel good and safe about the car you’re driving and I must say that the Satria Neo S2000 has provided me precisely with that degree of confidence.”

Meanwhile, Datuk Abdul Razak Dawood, the Head of Proton Motorsports, said to have the Satria Neo S2000 finishing in the company of the top three WRC contenders the likes of Citroen, Ford and Mini, was a tremendous boost for the team and Malaysian car manufacturer.

“We have four more days of rallying in Monte Carlo, but the results of the first four special stages have nevertheless made it an impactful debut for PROTON on the S-WRC circuit and above all, a strong indication that we are progressing in the right direction in terms of development of the Satria Neo S2000.”

Loeb and Elena storm into the early lead in Monte Carlo