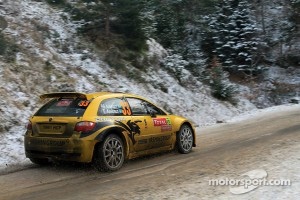 PROTON's PG Andersson piled on the pressure and stepped up his game in the Monte Carlo Rally to stretch his lead in the 2012 FIA Super World Rally Championship (S-WRC) category.

Combing the icy roads through snow, rain and fog, Andersson's Satria Neo S2000 held on to 9th overall and extended his overnight lead from 23 seconds to some 1 minute 40 second over his nearest S-WRC rival Kevin Abbring in the Skoda Fabia S2000.

Abbring dropped two places to 12th overall with Irishman Craig Breen in the Ford Fiesta S2000 3rd in the S-WRC class and 15th overall, a further five minutes behind. Frenchman Bryan Bouffier in the Peugeot 207 S2000 retains 4th place in the S-WRC class but moved up to 18th overall.

Reigning world champion Sebastien Loeb continued to dominate the Monte Carlo Rally to lead by more than two minutes ahead of Spain's Dani Sordo in the Mini. Sordo however, took advantage of third placeman Petter Solberg's misfortunes to build a gap of more than a minute. Solberg had damaged the wheel of his Ford Fiesta and subsequently suffered a puncture.

The third day of rallying was contested over three special stages in the mountainous region of Southern France which included tackling what is reputed to be one of the most difficult stages of the Monte Carlo Rally, the 24.13km Cimetiere de Vassieux - Col de Gaudissart.

"It's looking good but with five more special stages and two days of rallying ahead, it will come down to a test of nerves. Andersson is on course for what has been a phenomenal debut for PROTON on the World Rally Championship, and the team's extending all the support to see him to the finish," said Datuk Abdul Razak Dawood, the Head of PROTON Motorsports.