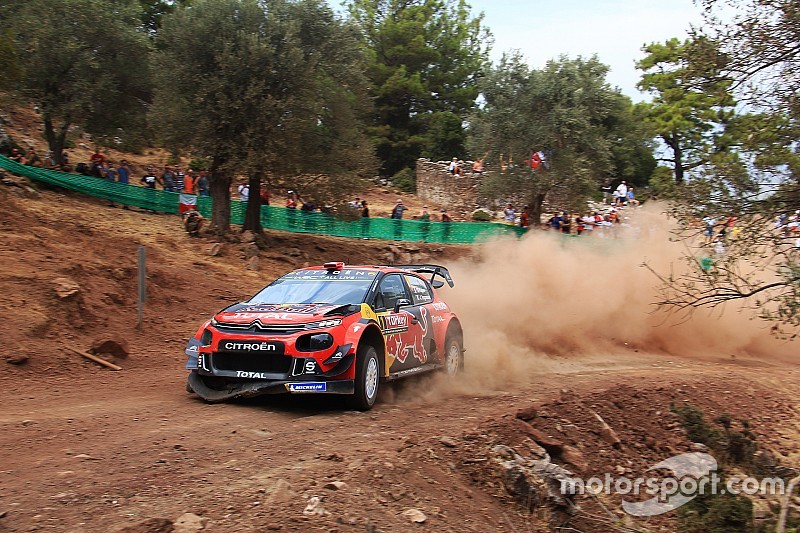 Sebastien Ogier almost halved the advantage of Citroen WRC teammate Esapekka Lappi in the fight for the lead of Rally Turkey during Saturday morning's stages.

Ogier started the day 17.7s behind Lappi, but managed to close the gap to just 2.2s after the second stage of the loop, Datca, having won the day's opener, Yesilbelde.

But Lappi fought back to win the final stage of the morning, Kizlan, to extend his lead back to 10 seconds ahead of the afternoon stages.

Thierry Neuville had started the day as the nearest challenger to the Citroen pair, but he lost ground when he rolled his Hyundai i20 after hitting a stone 17km into Yesilbelde.

Neuville was able to right his car and continue, but the incident lost him four minutes, dropping him down to eighth place, albeit he still set the second-fastest time on Kizlan.

His Hyundai stablemate Andreas Mikkelsen had a strong morning, moving up to third having won Datca, but is 1m08s behind Lappi, while Teemu Suninen (M-Sport Ford) remains fourth ahead of the second Hyundai of Dani Sordo.

While Ott Tanak dropped out with electrical dramas, his Toyota teammate Jari-Matti Latvala had an encouraging morning, moving ahead of Kris Meeke and into sixth.

Meeke made another mistake, spinning his Yaris on Kizlan, and is seventh, 0.1s behind Latvala.

Behind Neuville, Pontus Tidemund is up to ninth in his M-Sport Ford Fiesta, with Skoda driver Kajetan Kajetanowicz rounds out the top 10.