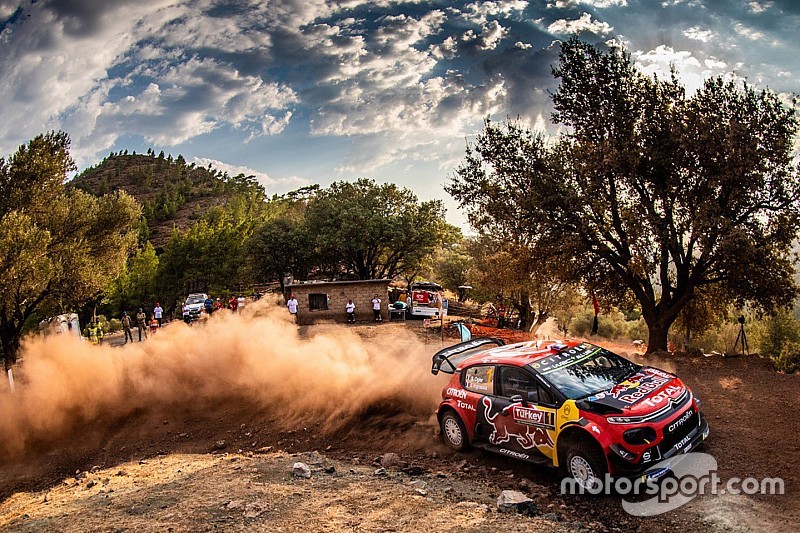 Reigning World Rally champion Sebastien Ogier has edged into the lead of Rally Turkey, just two tenths of a second ahead of Citroen teammate Esapekka Lappi.

Ogier’s afternoon got off to the perfect start as he won the Yesibelde stage for a second time, having won the same stage in the morning, and closed the gap to Lappi down to 2.2s.

The 2018 WRC champion was fourth-fastest on the following test, Datca, gaining 6.9s on his teammate and taking the lead as Lappi made a small mistake towards the end of the stage.

Lappi fought back brilliantly to win the day-closing Kizlan stage and close the gap back down to just 0.2s heading into Sunday's final four stages.

Andreas Mikkelsen (Hyundai) retains third after a consistent afternoon loop, but is 1m17.1s behind Ogier, while M-Sport Ford driver Teemu Suninen finished the day in fourth.

Dani Sordo was second-fastest on Datca, although he remains just under a minute behind Suninen in fifth in the second Hyundai.

Kris Meeke had an eventful loop as he first moved up into sixth position ahead of Toyota teammate Jari-Matti Latvala after Datca, but the Ulsterman's hard work was undone when he had a small crash 4km into Kizlan, and dropped back to 15s behind Latvala.

Thierry Neuville won Datca before going second-fastest with his Hyundai in Kizlan, but remains eighth and 4m38.2s off the lead after his roll in the morning.

M-Sport's Pontus Tidemand is ninth ahead of the Skoda Fabia R5 of Kajetan Kajetanowicz.