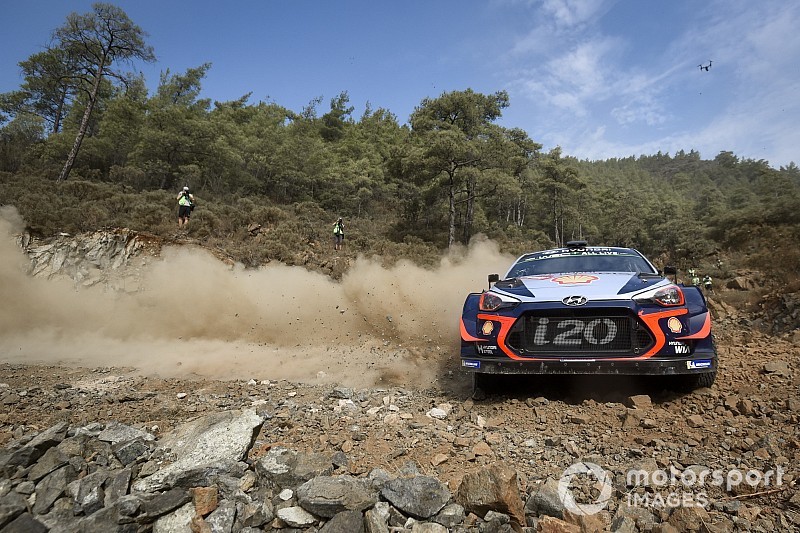 A surge in pace from the championship's top two coupled with chaos elsewhere in the field, particularly for Citroen, turned the order inside out during the second loop.

Ogier leapt from seventh to second behind Andreas Mikkelsen with a blistering win on the Cetibeli stage that began the afternoon, which was also where Citroen's rally fell apart.

Craig Breen had led for part of the morning with teammate Mads Ostberg in third, but both picked up tyre damage on SS6. They fell from second and third to eighth and fifth respectively.

Ostberg then went out of the leg completely when his front suspension broke on the following Ula stage, where Breen sustained another puncture too.

Neuville had been surprised to be one of those leapfrogged by Ogier on the first stage, and suggested the M-Sport Ford driver must be taking a lot of risks in the very rough conditions.

But Neuville then raised his own pace on the following Ula stage and won it for the second time in the day.

That took him back past Ogier and to within 1.9s of rally-leading Hyundai teammate Mikkelsen, who had been carrying a puncture on that stage.

Short of good tyres for the concluding run of Cicekli, Mikkelsen fell to third as Neuville and Ogier hit the front, and the top three will therefore start Saturday covered by just 2.6s.

Tanak still has Hayden Paddon and the third Toyota of Esapekka Lappi right on his tail.

Breen remains eighth ahead of Teemu Suninen, who started the afternoon with a surprise second-fastest time then reverted to being off the pace.

Elfyn Evans went out with suspension damage on Ula while already outside the top 10 following an error and differential trouble in the morning.