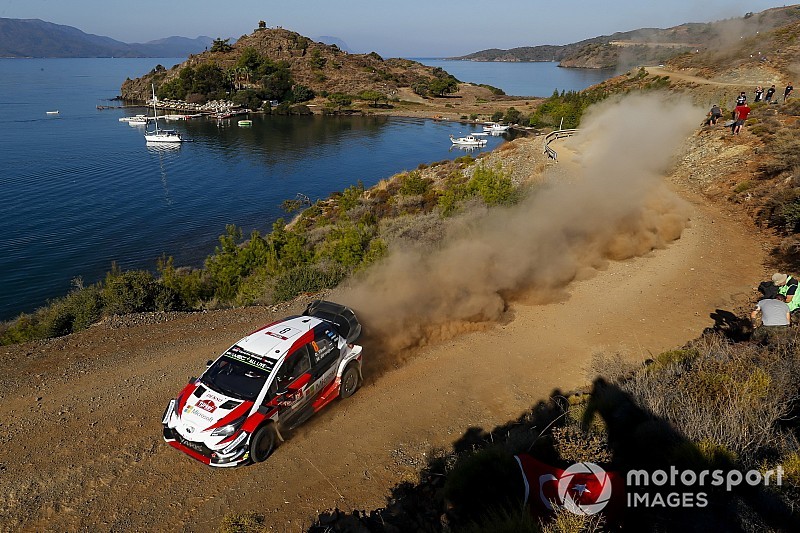 Tanak took a 13-second lead into the final day, and with his Toyota team calling off the fight with teammate Jari-Matti Latvala, it was simply a case of completing the remaining stages without trouble for the Estonian.

He stretched his lead out to 19.7s over the course of the three morning stages and after taking third on the Power Stage he ended up with a final margin of 22.3s over second-placed Latvala.

Tanak's victory and three bonus points means he overhauls Sebastien Ogier and moves up to second in the standings heading into the final three rallies of the season, just 13 points behind Hyundai's Thierry Neuville.

After bowing out of contention with broken front-left suspension on Saturday, Neuville rejoined on Sunday, winning SS14 before taking it easy on the following two tests ahead of the Power Stage.

The Belgian was the only driver to breach the five-minute barrier on the 7.14km Manmaris test, salvaging five bonus points in the process.

Ogier won both SS15 and SS16, climbing into 10th overall, but the M-Sport Ford driver fell 1.6s short of Neuville on the Power Stage as he struggled with a rear-left puncture.

"It was completely flat out," he said. "I knew there was not so much we could do because I think we are missing some pace but I did everything I could do with a puncture on the rear-left."

Overall, top Hyundai driver Hayden Paddon claimed the final spot on the podium over a minute behind Latvala, marking his first top-three finish of the season, ahead of M-Sport's Teemu Suninen and Andreas Mikkelsen's Hyundai.

Henning Solberg was sixth in his R5 Skoda Fabia, ahead of fellow Skoda driver Jan Kopecky, who sealed the WRC2 title with his fifth class win of the year.

Simone Tempestini (Citroen) and Chris Ingram (Skoda) benefitted from the heavy attrition among the WRC runners to take points for eighth and ninth overall, ahead of Ogier.