Strong showing by the Volkswagen team at the WRC Rally France: Sébastien Ogier/Julien Ingrassia (F/F) and Andreas Mikkelsen/Ola Fløene (N/N) dominated the Super 2000 class at the eleventh round of the World Rally Championship and took positions eleven and twelve overall. More than 300,000 spectators lining the Alsatian roads made for a unique turnout. The main focus of this test in competitive conditions was placed on the preparation for the coming season when Volkswagen will compete in the top category of rally racing with the Polo R WRC. 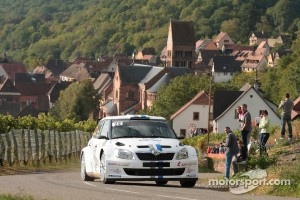 “I’m very happy with the entire squad. We finished this rally with a strong performance in class and smooth operations in service as planned. The changeable weather was probably anything but inviting for the large crowd of enthusiastic spectators but good practice for us, also from a tactical point of view,” said Volkswagen Motorsport Director Jost Capito. “Congratulations to Sébastien Loeb and the Citroën team on winning the World Champion’s title. We’re very much looking forward to competing against this strong squad next year with the Polo R WRC.”

Sébastien Ogier and Andreas Mikkelsen in their Škoda Fabia cars set the pace in the Super 2000 class straight from the start. After a compact special stage in downtown Strasbourg on Thursday, seven tarmac stages were scheduled on Friday. The Volkswagen drivers fought a nail-biting battle on these stages. A large number of damp sections made the tyre choice tricky, and in the evening the number 22 and 23 Fabia cars were separated by merely five seconds. On Saturday, the lion’s share of the route was awaiting the rally racers on seven special stages. In dry conditions, Ogier and Mikkelsen continued their remote duel until the Norwegian, in the afternoon, was struggling with an engine that was misfiring due to a defective injector and lost more than two minutes to Ogier. On Sunday morning, heavy rain and partially dirty sections yet again made for new conditions.

Last year’s winner Sébastien Ogier assessed the event positively: “In total, it was a good home rally for us. This year, we weren’t able to battle for overall victory because for us drivers and for the team it was mainly about gathering as much experience as possible and to try out various things. The conditions were changeable but good to drive on the whole,” commented the 29-year-old.

“Congratulations to Sébastien Loeb on winning the title – nine World Champion’s titles are truly outstanding, a unique achievement,” said Ogier, who on 15 of the 21 special stages set the fastest time in class and clinched the tenth class victory for Volkswagen. Andreas Mikkelsen was obviously happy too: “I’m very pleased with our rally. We managed to keep Sébastien and Julien’s pace most of the time and made no mistakes. Some of the special stages were new to us and we were lacking a couple of seconds there at times. That’s why it was so valuable to get to know them here in the competition,” said the 23-year-old who achieved six fastest times.