The first day of Rally Croatia’s debut on the World Rally Championship calendar brought a marathon eight stages, early drama and a three-way battle for the lead, with the Hyundai of Thierry Neuville holding a slender overnight advantage.

Based in the capital city of Zagreb, and with stages on the narrow lanes in the north of the country, Rally Croatia marks the WRC’s first all-asphalt rally since Germany in 2019.

The stages brought huge variations in the quality of the surface from one corner to the next, along with jumps and tight, technical sections.

The biggest feature of the event so far, however, has been mud and gravel dragged out of the verge, putting a premium on road position.

With the Day 1 starting order decided by championship position, this handed Toyota’s 20-year-old star Kalle Rovanpera a distinct advantage as he headed into the opening stage.

The WRC’s youngest-ever points leader duly began impressing from the opening split time but then slid wide on the exit of an acute right-hander less than a mile from the end of the stage and rolled out of the rally.

“I was struggling with the understeer of the car quite much the whole stage,” said the rather rueful Finn.

“I just came in and did my braking and tried to go in through the corner and I lose the car already in the entry of the corner, I never made the proper racing line… a bit too much speed and then understeer and that’s the result, so, my mistake.”

Rovanpera’s demise handed the honour of leading the field to Neuville, who was quick to capitalise.

The Belgian has yet to challenge for victory in 2021 after ditching his long-time co-driver Nicolas Gilsoul on the eve of the Monte Carlo Rally.

In the opening rounds of the season, Neuville had to establish a new rapport with current incumbent Martijn Wydaeghe, but the pairing appears more assured in Croatia after Wydaeghe, a natural Flemish speaker, worked hard between rallies to get his French pace notes up to scratch.

Neuville duly won three of the four stages in the morning loop; only failing to capitalise on Stage 3 when Britain’s Elfyn Evans recorded the first fastest time of the day for Toyota. 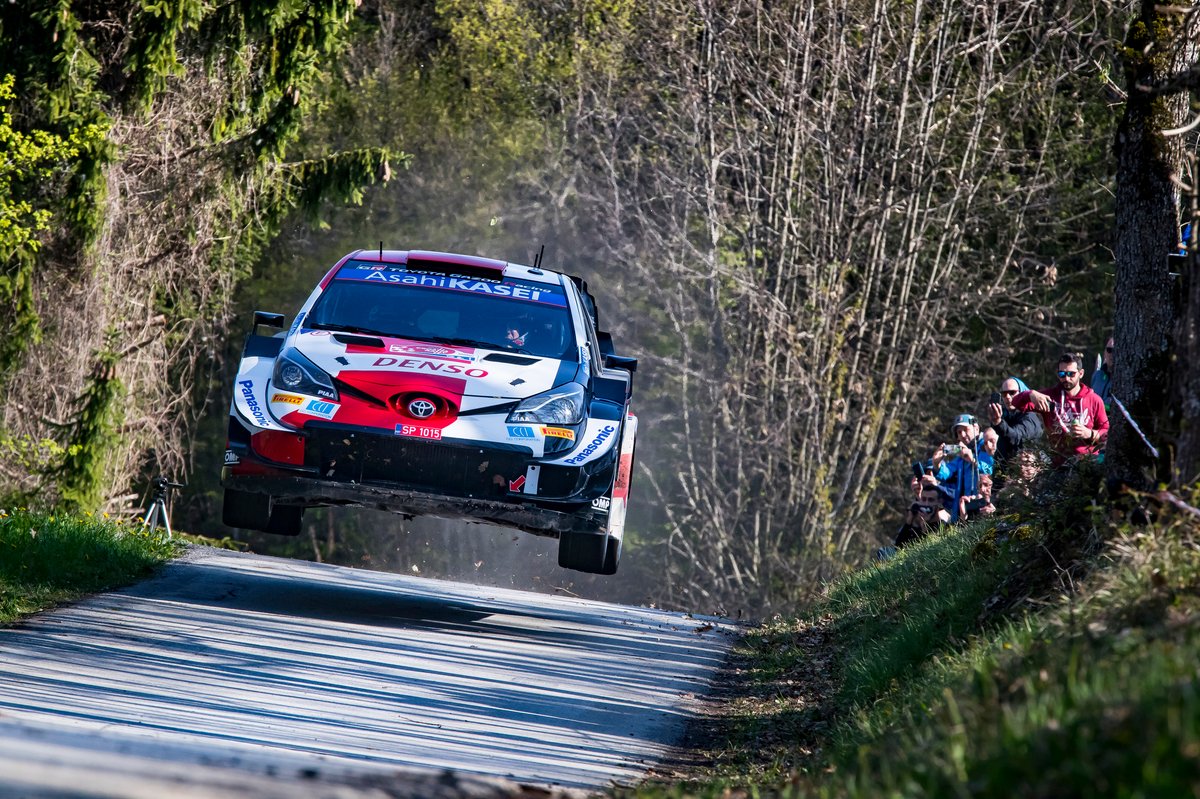 Evans held second place at the end of the first loop, 7.3 seconds behind Neuville and 5.0s in front of his team-mate, seven-time WRC champion Sebastien Ogier, in third.

The defending champion narrowly avoided coming to grief on the same corner as Rovanpera and was lucky to escape with just a puncture, costing him only a couple of seconds over the short distance to the stage end.

Ogier felt that his setup choices for the morning loop needed reassessing if he was to challenge the leaders.

“It’s around the differential that I’ve made some change, something I haven’t tried in the test, but I expected a bit more difficult condition actually this morning, actually,” he said.

“I expected, actually, more humidity, and I’ll try to make some change on that back (to) something I know and I hope to be able to pick up a bit more speed there.”

Some speed was found on the afternoon run through the loop, with Ogier winning three of the four stages and passing Evans for second place in the process.

Not only was Ogier well and truly back in the lead battle as a result, but also he recorded his 600th WRC career stage win on Stage 7.

A big gap opened up between the top three and the rest of the field on the morning loop, headed by 2019 WRC champion Ott Tanak in his Hyundai.

The Estonian made an unconventional tyre selection, opting for hard compound rubber all round, and dropped 25 seconds as he struggled to get comfortable on the tricky Croatian surface.

“Like ice!” he said of his troubles, and also rued being forced to run through the dirt left behind by the cars in front. “The road is full of shit to be honest,” he added.

The third Hyundai of Craig Breen was also considerably down on pace, ending the day 22.9s behind Tanak, while a spirited battle between the M-Sport Fiestas of Britain’s Gus Greensmith and WRC debutant Adrien Fourmaux ended its first day with the Frenchman 7s to the good.

In WRC2, defending champion Mads Ostberg made his first appearance of the season for Citroen, having been a member of the TV punditry team for the opening two rounds.

The Norwegian ended his opening day with a slender advantage over the VW Polo of Russia’s Nikolay Gryazin, with championship leader Andreas Mikkelsen crashing out and the M-Sport entry of Teemu Suninen almost 45s adrift.

The action continues tomorrow with another eight-stage marathon, and concludes on Sunday with four final stages, including the bonus points-paying powerstage.