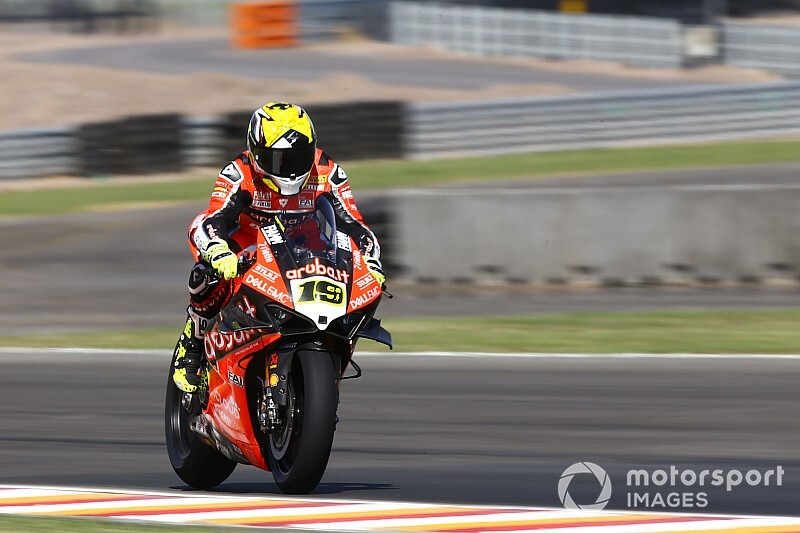 Alvaro Bautista grabbed his fourth World Superbike pole of the season after topping a bizarre Superpole session in Argentina.

Riders were critical of the dusty track conditions after Friday's practices, with laptimes over four seconds off of the pole pace from last year.

Conditions improved somewhat for Saturday after an effort by WSBK to clean the circuit, though the track still remained difficult.

Ten Kate Yamaha's Loris Baz crashed on his out-lap at the Turn 16 left-hander when he lost the rear of his R1, with official Yamaha team rider Michael van der Mark setting the early pace with a 1m41.566s – though this was some 1.9s off of Toprak Razgatlioglu's best effort from FP3.

Ducati's Bautista soon deposed van der Mark with a 1m41.224s, before ramping up the pace further with just under 18 minutes of the 25-minute session remaining to a 1m40.771s.

The opening stints on race tyres were punctuated by numerous moments and offs for riders, which kept Bautista's time intact.

Bautista's Ducati teammate Chaz Davies was the first to start a flying lap on the qualifying tyre, but a mistake early in the lap led to him returning to pitlane to revert to the race tyre.

As the chequered flag brought the session to a close, only newly-crowned five-time world champion Jonathan Rea was threatening Bautista's earlier benchmark on his qualifying tyre lap.

However, the Kawasaki rider dropped time in the last sector and could only cement third spot with a 1m40.911s, with Bautista and van der Mark's early race tyre laps securing them first and second.

Razgatlioglu heads row two on the Puccetti Kawasaki, with Alex Lowes (Yamaha) and Michael Ruben Rinaldo on the Barni Ducati falling in behind.

Davies was on course to make a slight improvement on his final lap at the end on the race tyre, but remained in seventh with a 1m42.153s, with Althea Honda's Alessandro Delbianco getting his best qualifying result of his debut season in eighth.

GRT Yamaha's Sandro Cortese and his teammate Marco Melandri completed the top 10, with BMW's Tom Sykes and Kawasaki's Leon Haslam struggling to 13th and 14th in the conditions.

Baz was unable to get back out after his early crash, and will line-up 18th for the first two races of the weekend, with home hero Leandro Mercado starting behind him in last spot due to an engine issue restricting him to the role of spectator during Superpole.