Bautista "lucky" not to crash after Davies lunge 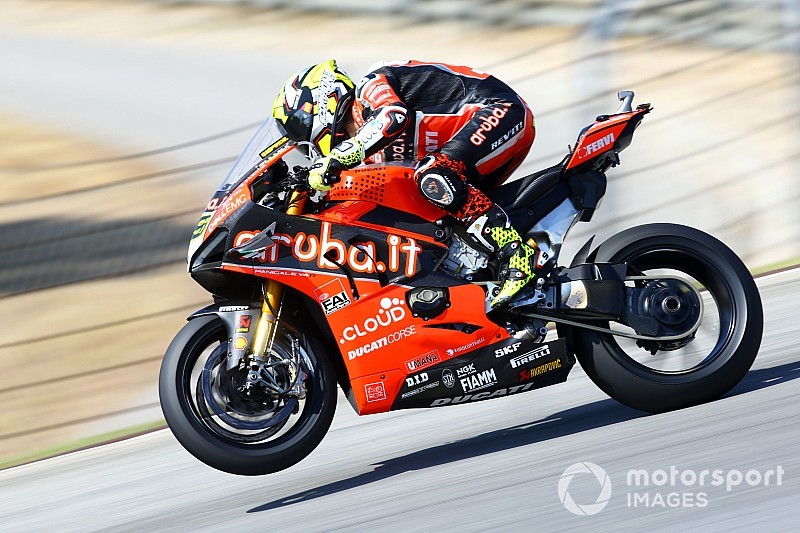 Alvaro Bautista quipped he doesn’t “need enemies” with a teammate like Chaz Davies, after the erstwhile World Superbike points leader was forced off line at the start of Sunday's Portimao opener by Davies.

Davies was recovering from what he called a “s***” qualifying position of 12th off the line, and leaped up to the top five with an aggressive move on Bautista.

Bautista was forced sit up to avoid a crash, and only narrowly avoided tagging the rear of Yamaha’s Alex Lowes. The Ducati rider dropped to 15th as a result.

The Spaniard says Davies entered the first corner “like no other rider”, and feels his teammate was “in the wrong line” under braking.

“Well, what happened… with teammates like that, I don’t need more enemies,” Bautista, who recovered to fourth, said after the race.

“I mean, at the start I was [on the] inside of the corner, and then Chaz arrived more inside and he touched me, and I was lucky to not touch Lowes because we could’ve crashed together. So in that moment I was lucky.”

He added: “He [Davies] started two rows behind me, he made a good start. But in the first corner he entered like no other rider on the track.

“He was even [tighter], even more inside than me, and I didn’t pick up the bike, then we [would have] crashed together. So, for me, he was a bit in the wrong line.”

Davies, who finished second, concedes he was “aggressive and deep” on the brakes and apologised for sitting up Bautista, but feels it was “just racing”.

“I didn’t feel contact,” Davies admitted. "I was in there aggressive and deep, but I was gonna stop the bike, I wasn’t gonna skittle anybody.

“I was committed because I knew I had to do [that] to put in a good race. Unfortunately, I sat him up, and then I don’t know what happened after that.

“I think it shocked him a little bit because I was very committed on the inside. Sorry to him, but it was just racing, I think.”

Bautista’s fourth-place finish and a dominant win for Kawasaki’s Jonathan Rea has meant the Ducati rider has dropped another 12 points to extend his championship deficit to 93.