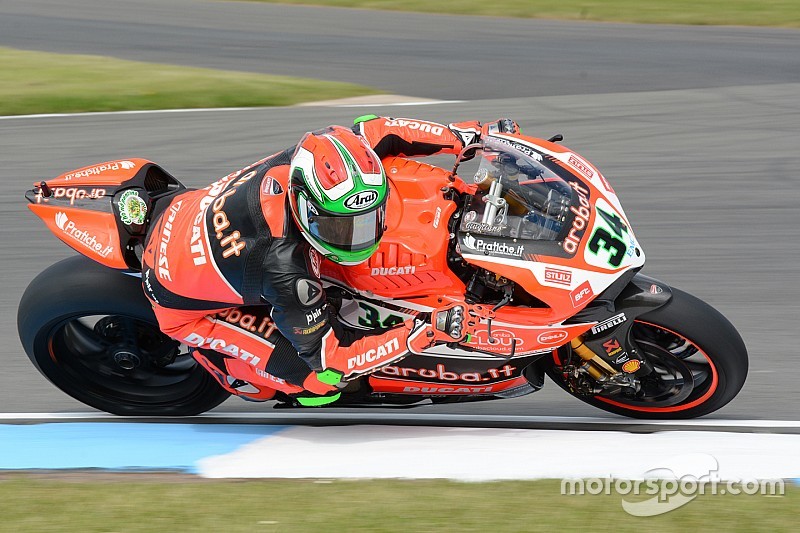 The seventh Pole Position of the 2015 season has been won by Davide Giugliano (Aruba.it Racing – Ducati SBK Team) who claimed the fifth Pole Position of his career in this afternoon’s Tissot-Superpole session, the second of the year. The Italian rider overhauled Tom Sykes (Kawasaki Racing Team) and team mate Chaz Davies by 0.116s and 0.359s respectively, on his way to the fastest lap of the weekend so far (1’41.764s). Giugliano was last at the front of the grid at Imola.

Sylvain Guintoli (Pata Honda World Superbike Team) achieved his best qualifying result of the season in 7th, while championship leader Jonathan Rea crashed at the exit of Turn 2 at the start of his second flying lap. The KRT rider will start tomorrow’s two 20 lap races from the middle of row 3 in 8th alongside Jordi Torres (Aprilia Racing Team – Red Devils).

Superpole 1 saw the aforementioned Alex Lowes and Leandro Mercado progress to the final shoot-out, courtesy of being the fastest two riders in the first 15-minute session.

"In this morning’s session we worked really well and I think we took another good step forward with respect to yesterday's sessions. This afternoon it was more tricky, also because of the higher temperature but I can say that we’re feeling confident ahead of the races. I’m really pleased with pole position and I see this as an important result which also boosts my morale. Tomorrow I hope that race 1 takes place in slightly cooler conditions while I realise that the second will be tough if conditions are particularly hot.”

“Most importantly I am on the front row and we have also evaluated a couple of minor set-up things in Superpole. There is a new qualifying rear tyre for Superpole at this round and it seems good. We will speak again tonight and work on a couple of more aspects in time for race day. I think overall we have a good bike, a good package and the consistency is there. Davide Giugliano was just behind me and on some parts of the track that helps, so maybe I helped give him pole position - but that is racing. I have to accept that and he is a good guy, so no worries. I am relaxed and ready to go racing.”

“I’m happy to have qualified on the front row of course. I feel that we’ve improved performance on the race tyre; I was able to complete two solid laps in Superpole on that tyre and felt more comfortable compared to this morning, so I think we’ve definitely taken a step in the right direction. We’ll continue to work on a couple of small things that I think are still causing me to lose a couple of tenths but overall we’re doing ok. We’re confident in our tyre choice for tomorrow and, although it won’t be easy, I hope to be able to complete two good races.”