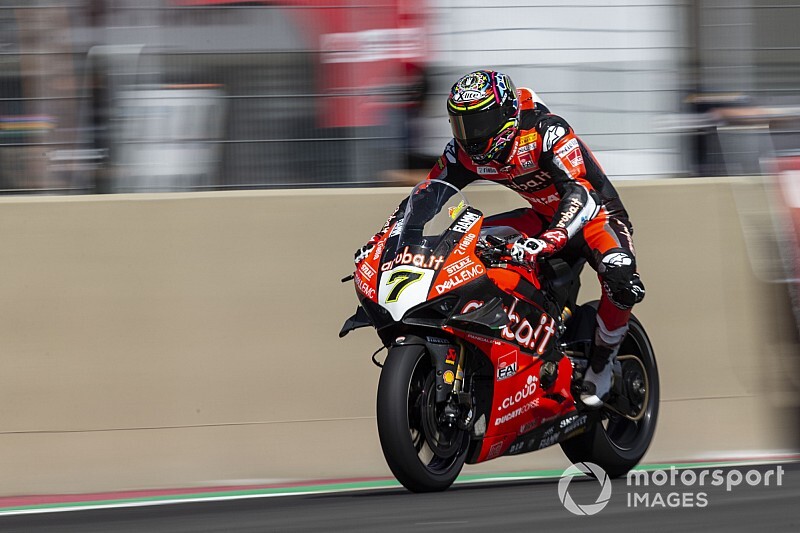 Chaz Davies has accused the FIM of knowingly approving the El Villicum World Superbike circuit in Argentina knowing it “didn’t come up to homologation spec”.

The Ducati rider was one of six who decided against racing on Saturday after raising safety concerns over the circuit due to the thick dust and poor asphalt quality causing several crashes and riding issues all weekend.

Originally “90 percent” of riders agreed not to race, before the organisers allegedly went behind their backs to their team managers to put pressure on them to contest the opening race.

Among them was world champion Jonathan Rea, who came under fire from Davies and Eugene Laverty on Saturday for making a “spineless” decision to turn his back on the boycott having initially been in favour of it.

In a scathing outburst to Eurosport during the race, Davies – whose teammate Alvaro Bautista did take part and won – says WSBK shouldn’t have even been in Argentina as the state of the track was known about for some time beforehand.

“For a few months we’ve known the conditions of San Juan and on Wednesday night the circuit was homologated, even though admittedly by the FIM they said that the circuit didn’t come up to homologation spec,” he said.

“The temperature has come up and up, and we felt as riders… 80, 90 percent of the riders before the race all agreed that it was incredibly risky to go do it.”

He added: “I stand by the decision some of us made, I think sometimes you’ve got to do that and I’m disappointed that it hasn’t worked out.

“We shouldn’t be in this situation coming to a circuit in 2019 with conditions like this. We shouldn’t be here full stop, and the pressure that then puts on you to go out there in risky conditions is massive and nothing is bigger than safety in the sport.

“It’s dangerous enough, and Loris Baz went home with a broken wrist and we saw that coming already yesterday. So, it’s a bit of a crap situation.”

Baz crashed on an outlap during Superpole, but revealed on social media after missing the race that he did not break his wrist and was instead just suffering from pain in it as well as his head.

Laverty backed up Davies’s claims over the circuit’s wrongful homologation, and says the problem of oil seeping through to the surface when temperatures soar is down to the asphalt being laid by “guys that surface the street”.

“This track should never have been homologated,” he fumed. “But what’s the point in having the homologation standards in place if you come and you look at a list of five items and see they haven’t even done anything close to that, and then feeling peer pressure or whatever from TV and all the rest and signing off on it Thursday night?

“I mean, the asphalt level isn’t even homologated to FIM standards. The guys that did the track are guys that surface the street and they didn’t use the correct mix and that’s why it’s [oil] coming up at a certain temperature.

“Whenever conditions were cool I was able to lap in 1m41s. Whenever it was hot, I was 1m50s – that’s nine seconds, that’s like wet conditions. The track isn’t up to standard.”