Jonathan Rea won a red-flagged World Superbike Superpole race at Donington Park, which was stopped due to a mass crash at the Melbourne Loop on lap seven. 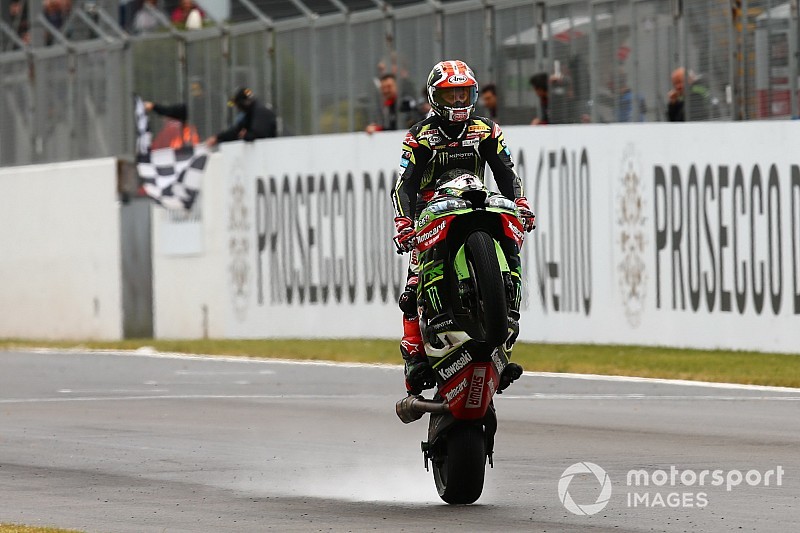 Poleman Sykes grabbed the holeshot off the line ahead of former Kawasaki teammate Rea, with Haslam on the sister KRT bike slotting into third.

Behind, Alvaro Bautista carved past Hickman at the Fogarty Esses to move his Ducati into fifth, while Toprak Razgatlioglu took third from Haslam a lap later on the Puccetti Kawasaki.

Rea shadowed Sykes for the first two laps, before making his first attempt at taking the lead at the Fogarty Esses on lap three. However, the championship leader ran in too hot, allowing Sykes to immediately strike back to regain the position.

This allowed Razgatlioglu to close in, with Haslam beginning to just lose touch with the leading trio.

Rea made another daring raid on the lead at the Esses two tours later, and successfully barged his way past Sykes.

The BMW rider regrouped to stick on Rea's back wheel, but was unable to mount another challenge when the red flags came out as the leaders started the eighth lap.

Sykes crashed on the same oil which caused the pile-up at Melbourne Loop, and was subsequently removed from the results, having been unable to return to the pitlane unaided. This promoted Razgatlioglu to second, with Haslam completing an all-Kawasaki podium.

Bautista was fourth in the end, ahead of Ten Kate Yamaha's Loris Baz and his works counterpart Alex Lowes on the Crescent-run R1.

GRT's Marco Melandri completed the top 10, while Rinaldi was the last classified runner in 11th, having remounted from his crash.

Rea's victory extends his points lead from nine to 15 over Bautista, and he will start on pole for this afternoon's second feature race.

Bautista: Crash caused by riding too fast with "s*** feeling"