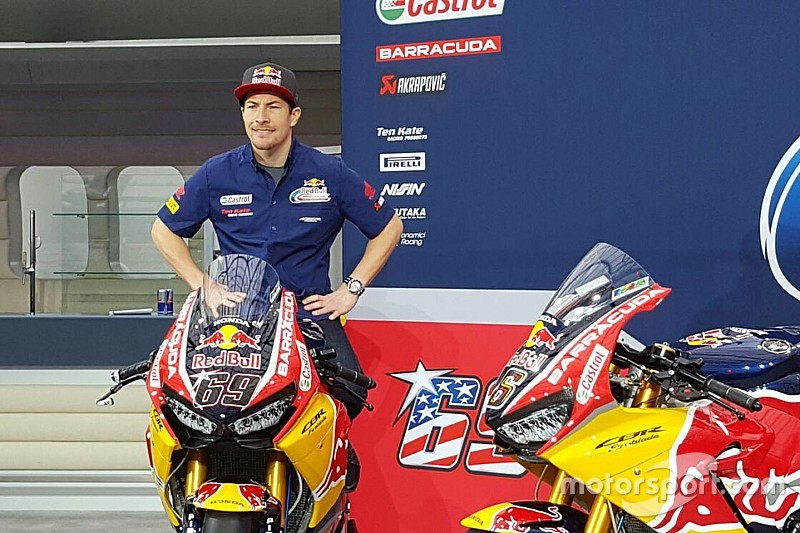 Honda World Superbike rider Nicky Hayden "doesn't love" the new grid system the series will introduce this year, but "understands the reasons" behind it.

Until the end of 2016, the grid for both races was identical, set by the Saturday Superpole sessions.

But from 2017, a reverse-grid Race 2 rule will be introduced, which will see the riders finishing between fourth and ninth in Race 1 gaining three places and starting from first to sixth in the second race.

In addition, the first race's top three will be moved down to the third row in reverse order.

While Hayden admitted the rule has its advantages, as it could "make for good racing", from his own point of view he is not in favour of it.

"As a racer I don't really love it, because I don't think it's the best way - but on the other hand, from the show, the outside I can understand some of the reasons why they want to do it," said the former MotoGP champion.

"[They want to] have some more bikes at the front, give the fans a different race for the second race, and truthfully I am just going to wait and see.

"I know everybody has an opinion and think they know everything but let's wait and see how it plays out."

He added: "I don't know, I think the rule is not too bad honestly I think it could make for some good racing.

"Of course I say that because last year I finished many times in fourth, fifth position, it's like you only like it because it's better for you.

"But the truth is I think they found a pretty good balance - it's not completely reversed, that would be crazy."

Hayden suffered a knee injury after the end of the 2016 season, which forced him to sit out one of the post-season tests.

While he hasn't missed any running this year, Hayden admitted the knee was still a problem during the first test at Jerez, and hopes it will be fully healed by Phillip Island, where the season opener takes place on February 25.

"I need two weeks to Phillip Island because in Jerez it was a little bit tight, but in Portimao it already felt better," he said.

"So hopefully by the time I get to Phillip Island it's no problem at all."