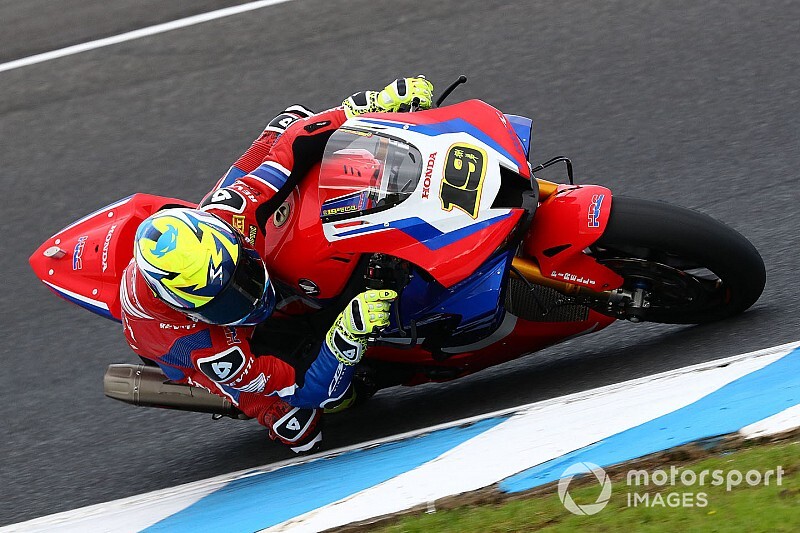 Having entrusted its factory WSBK return to the Althea and Moriwaki teams in 2019, Honda formed a new outfit - known simply as 'Team HRC' - to run its brand-new bike that replaces the previous-generation Fireblade that raced from 2017-19.

Leon Haslam achieved the team's best result of the Phillip Island weekend after taking fifth place in the opener on Saturday, one place ahead of new teammate Bautista.

The Spaniard matched that finishing position in the second full-distance race of the weekend on Sunday, albeit after a crash during the Superpole race left him having to make his way through from the rear of the field.

"It's a pity because I think I could have been in the top five in those conditions," said Bautista of the crash. "The feeling with the bike was improved, we made some changes from [Saturday] and it made me more comfortable on the bike.

"I think it has been a positive weekend for us. We were not too far from the front riders. We have a really big margin to improve. We marked a base, now we have to work on the bike and try to improve for the next races."

Bautista said the warmer temperatures of Sunday were a challenge for Honda, although the slower pace made it easier for him to keep up with the leaders.

"So it was easier to be in the front group, but at the same time more difficult with the conditions, especially with our bike, which is for sure not perfect, we are struggling a little bit more when the conditions change.

"But at least it was positive to see the front group."

Haslam followed up his fifth place in the first race with eighth in the Superpole race and a disappointing 12th in the finale, remounting after an early incident in which he crashed into Michael Ruben Rinaldi's GoEleven Ducati.

"A false neutral, my mistake, caused me to crash in Race 2," said Haslam. "I’m a little disappointed with the weekend’s results because I felt we had the pace to be on the podium.

"But we all know that, at this track, it is key to put everything together, saving the tyre, engine management etc. and so I think that’s why we did how we did today, with no previous references to use either of course.

"In Race 1, we were there until four laps from the end, so the weekend has had its positives of course, while [Sunday] was a little more difficult. Essentially, I’m fairly happy with our speed, but we need to manage it better."