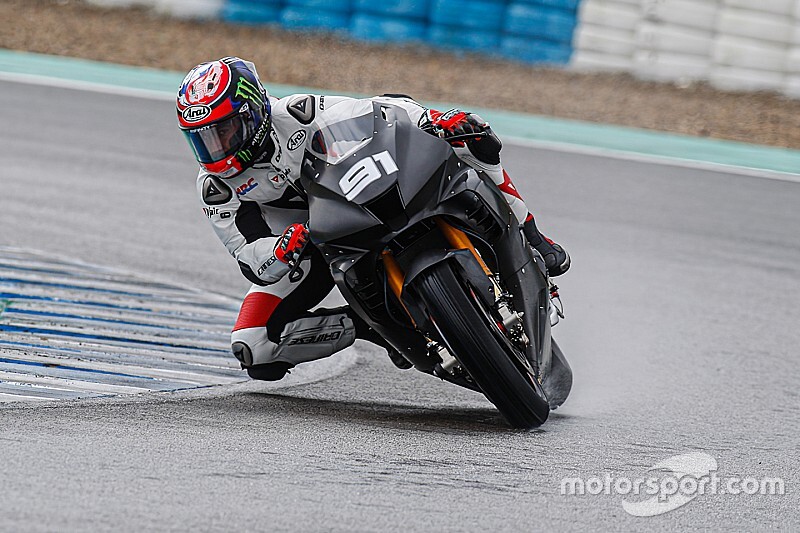 Leon Haslam topped a wet opening day at the Jerez World Superbike pre-season test in Honda's first public outing with its all-new CBR1000RR-R, while there were no times from Jonathan Rea.

Testing for the 2020 WSBK campaign began back in November, though Honda's running with Haslam and Ducati exile Alvaro Bautista had taken place without the rest of the field in private outings at Aragon, Portimao and Jerez.

Despite the wet track conditions, riders took to the Jerez circuit when the session was greenlit at 11am local time.

Reigning British Superbike champion and new works Ducati signing Scott Redding set the early pace aboard his Panigale V4 with a 2m04.580s – though this was steadily improved upon as circuit conditions got marginally better across the rest of the morning and early afternoon.

Haslam's session-topping time came at around 3pm local time, when he guided the Honda to a 1m52.149s, having taken over from Ten Kate Yamaha's Loris Baz at the top of the standings.

American star Gerloff was comfortably fastest WSBK rookie on Wednesday, with his GRT teammate Federico Caricasulo – who steps up from World Supersport this year – four tenths adrift in ninth spot.

Redding slipped to fourth after another brief run at the top of the standings, while Baz completed the top five as Ten Kate gears up for its first full season in WSBK since 2018, having only contested eight rounds last year.

Tom Sykes was top BMW runner in sixth with a 1m53.097s, while Alex Lowes was the only works Kawasaki rider to post a time on Wednesday in seventh.

World champion Rea opted against doing any mileage, though did complete some laps on Tuesday following a filming session with KRT – which will miss the upcoming Portimao test.

Rea is not expected to feature on Thursday either, but is expected to get some private running ahead of the Phillip Island test before the season opener.

Yamaha new boy Toprak Razgatlioglu caused a red flag with a crash at Turn 1 during a downpour and ended the day eighth, while Bautista was 10th, having completed 15 laps on his Honda.

Chaz Davies was another crasher on Wednesday, with the Ducati rider also coming off at Turn 1. Unharmed, he finished the day 21st ahead of Leon Camier's Barni stand-in Sandro Cortese.

HRC MotoGP test rider Stefan Bradl is also present at Jerez, putting miles on the RC213V ahead of next month's Sepang pre-season test. No times for Bradl were available.