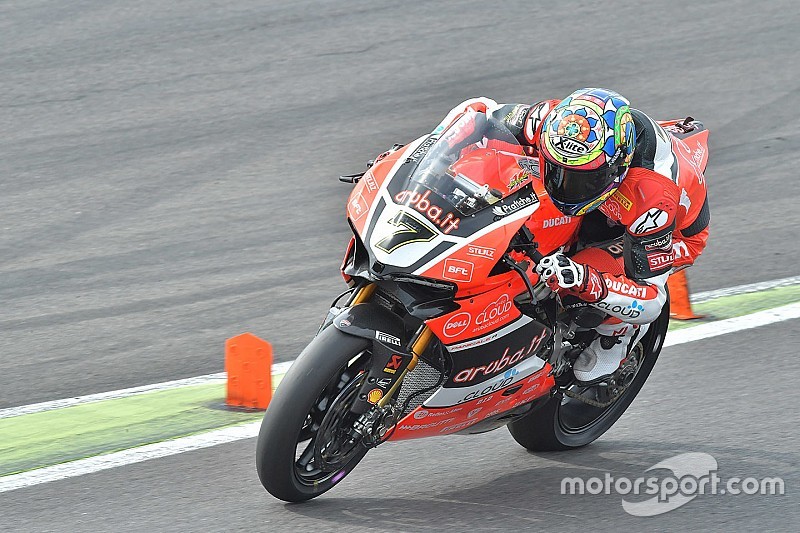 Ducati's Chaz Davies topped his second qualifying of the 2016 World Superbike season at a damp Lausitzring, beating Tom Sykes by a tenth.

Jonathan Rea, who fought through Superpole 1 alongside Davide Giugliano, was first to lead in the second session.

However, he was behind behind Davies and Sykes by the time the championship-leading trio pitted.

While they were not on track, other riders took advantage of the track conditions, Lorenzo Savadori staying out to go top by seven tenths.

Davies retook first, once he rejoined, by more than a second and his time was enough to stay ahead without him improving even further.

Sykes was up to second with his penultimate lap, seven tenths slower than Davies, and then only improved by 0.6s and, as such, stayed behind the Welshman.

Nicky Hayden took a front row spot in the end despite sitting only 11th before his last-second effort.

Savadori took fourth ahead of Jordi Torres as five different bikes completed the top five of the grid.

Rea only ended up sixth, 1.5s slower than Davies and just a tenth ahead of MV Agusta's Leon Camier.

Superpole 1 winner Giugliano was eighth, the Italian's session featuring a visit to the grass.

Yamaha's Alex Lowes completed the order, having not ran a lap in the session.