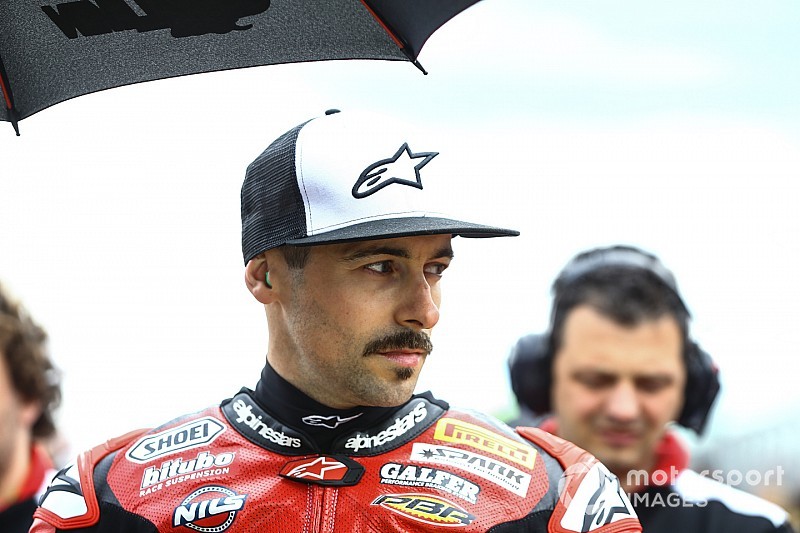 Go Eleven Ducati rider Eugene Laverty will attempt to ride in this weekend's Donington Park round of the 2019 World Superbike season, having missed the last three events through injury.

Laverty suffered two broken wrists in a heavy high-side fall during practice at Imola, and was subsequently ruled out of the remainder of the Italian round while he headed off for surgery.

Missing the Jerez round as a result, he had hoped to stage a comeback last time out at Misano, but once more had to withdraw to continue his recovery.

Laverty revealed on social media he has been riding a 300cc bike to evaluate his physical condition, and has decided to try and ride at his home round this weekend at Donington Park.

He said on Twitter: "I've decided to give Donington WorldSBK a try this weekend. I've ridden some laps at Nutts Corner on my neighbour Jack Ferris's 300 and managed to open the gas flat out.

"What's another 700cc really? I'll find out on Friday. My original plan was to try riding at Laguna [Seca] because it has just three real right corners. That would be the smart thing for us to do, but no-one said we were smart."

British Superbike frontrunner Tommy Bridewell made his WSBK debut in place of Laverty at Imola and Jerez, securing a best result of 10th having finished all races inside the top 15.

Having taken the points lead in BSB prior to Misano, Bridewell decided against deputising in Italy, with Ducati test rider Lorenzo Zanetti taking his place instead.

Laverty isn't the only injured rider attempting a comeback at Donington, with Yamaha's Michael van der Mark confirming he will try and ride in the UK just a fortnight after injuring his wrist in a vicious crash at the end of FP2.

Van der Mark underwent surgery to stabilise the wrist soon after, but says it hasn't impacted his training in any way and hasn't lost strength in the wrist.

"I knew as soon as I'd had the surgery on the wrist that a return to racing at Donington Park was a possibility, so that's what I've been working towards since," van der Mark said.

"I haven't lost any strength in the wrist, which was my main concern. The movement is still slightly restricted, but I've been having physiotherapy since Misano to improve this.

"It has hardly impacted on my training and I've been able to train with the same intensity as I did before the injury, so I hope to be passed fit to ride this weekend."

McAMS Yamaha BSB race winner and former Moto2 rider Tarran Mackenzie is on stand-by to make his WSBK debut should van der Mark have to pull out of the Donington weekend.

Honda rider Leon Camier will miss his home round and the US event next week as he continue to recover from a shoulder injury sustained at Imola. He will not be replaced.

Is the World Superbike title slipping from Bautista?