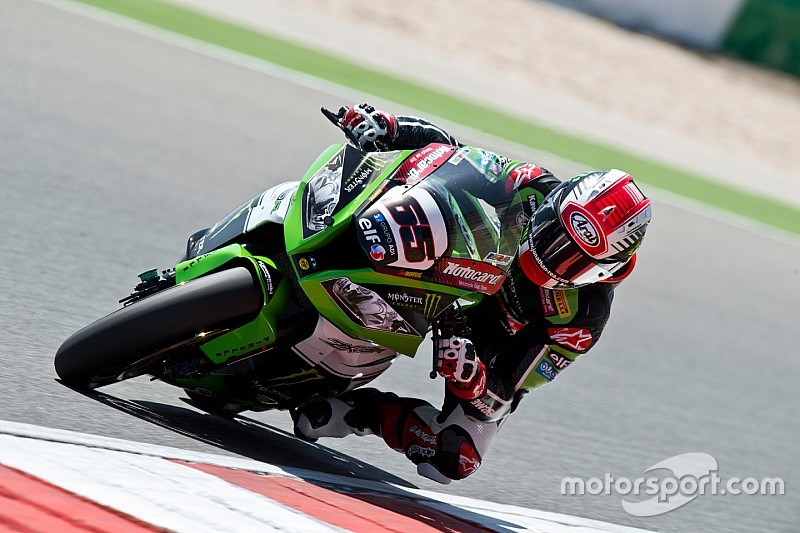 Giugliano took the lead on lap 7 where he stayed until being passed by Rea with 5 laps to go. The current points leader was kept under constant pressure by the Italian, but held on to record his 11th win of the year by 1.290s. Rea’s double podium finish equals the record set by Troy Corser in 2005 of 16 consecutive podium finishes in a season.

Behind the first two, Leon Haslam (Aprilia Racing Team – Red Devils) got the better of Chaz Davies on the second factory Ducati after their own personal race long duel to claim the final podium place.

Race one winner Tom Sykes (Kawasaki Racing Team) was strong for the first half of the second encounter before dropping back to fifth at the flag. The former champion finished just ahead of Max Biaggi and Jordi Torres, the Aprilia Racing pairing swapping places throughout the 21 laps.
Michele Pirro rode a lonely race to finish eighth on the third Aruba.it Racing Ducati, with Pata Honda team mates Sylvain Guintoli and Michael van der Mark completing the top ten.

Leandro Mercado’s run of point scoring finishes in every race came to an end, the Argentine rider retiring his Barni Racing Ducati at the end of lap 3. Alex Lowes (Voltcom Crescent Suzuki) was another of the riders to retire, on lap 9, while Matteo Baiocco (Althea Racing Ducati) fell off his Panigale R machine to end as the local rider’s racing weekend drew to a close on a low.

Jonathan Rea #65 - Kawasaki Racing Team: “Obviously we have to start to think about the championship now but I wanted to win today. In race two Davide Giugliano was a good marker to understand my pace and then with a few laps left I made a move to pass. We made a great race and I think at the end we are using our rear tyres better than some others. We changed our rear tyre choice from race one and that was always the plan, as the morning was a bit cooler. Kawasaki has given us a bike to win and they proved that today with Tom winning race one and me winning race two. I am so grateful to be in this position.”

Tom Sykes #66 - Kawasaki Racing Team: “A lot of people would dream about a weekend with a pole position, a win and a fifth place but we were just not able to do it in race two. I do not think I started very well in race two but from the beginning I was lacking some grip and it was very difficult to recover. When I started fighting with other riders I was not able to be strong where I needed to be but we tried everything we could. I knew both races would be difficult today but we had a great race one. We were just not able to repeat it in race two. We have had positives and negatives this weekend and we will move on to America now.”

Davide Giugliano #34 - Aruba.it Racing - Ducati SBK: “We were so close to the podium in race 1 and then got there in race 2 but I’m a little disappointed because I wanted to win here. Unfortunately Friday’s session and the fact I couldn’t work effectively due to my physical condition didn’t help us. Today I was missing a little grip in both races, the rear tyre was sliding around and that made it difficult to ride as I wanted in the final laps. But all in all, I’m pleased because I was able to hold the lead for many laps in race 2 and, seeing that I only came back at Imola, this shows that the bike has developed and that we are working really well.”

Max Biaggi #3 - Aprilia Racing Team: “I'm happy with this weekend. Everything went well and we didn't make any mistakes. Once again I'd like to thank the Piaggio Group, Aprilia and the guys from Noale for all this Race 2 went better than the first. I finished about 5 seconds behind the winner, which is really not much at all. It's a shame about the first laps when you find yourself following from behind it's a struggle. I am still unable to take full advantage of the tyres straight away, whereas from mid-race I felt fast but struggling to overtake I lost a few tenths every lap. This type of return is definitely not easy, but it was a great weekend, tackled with a different spirit than the full-timers. Now I'm hoping for the cherry on the top: Sepang. This round was sort of a test, next time we'll do well.”

WorldSBK is California-bound for the US Round - video