Guintoli extends his lead in the point standings. Once againWorld Supersport is won by Sam Lowes

Portimao (Portugal), Sunday 9 June 2013 – Round 6 race day at the Autodromo Internacional do Algarve was a mix of great performances and big disappointments for some of the protagonists of the eni FIM Superbike World Championship. Today's winners Marco Melandri (BMW Motorrad GoldBet) and Eugene Laverty (Aprilia Racing Team) experienced some tough luck when not on top: the Irishman was leading Race 1 before a technical problem ruled him out of contention, while Melandri had to face an excessive rear tyre wear to eventually end up 12th in the second race.

Tom Sykes wasted an opportunity for a repeat podium finish by crashing out of Turn 2 during the sighting lap of the last race. The Englishman showed he had what it takes to fight for the win later on, as he set the new lap record despite being way out of the battle for points. With a second and a third place in the two races Sylvain Guintoli (Aprilia Racing Team) boosts his points tally to 213 to increase the gap in the points to 28 over Sykes and 39 on Laverty.

Even though a slight improvement between the two races – still not matching early expectations - as per the application of FIM Regulations art. 2.4.8.1.3 Ducati will see the removal of the air restrictors on their 1199 Panigale R, starting from the next round at Imola (June 28-30).

Marco Melandri won Race 1 following a close battle in the closing stages with Sylvain Guintoli, that ended up with just a 0.007 gap between the two at the finish line – 4th smallest margin for victory ever in a WSBK race. A perfect exit out of the last corner was just not enough for the Championship leader to snatch victory over the Italian.

The works Aprilia team's race outcome was well saved by the Frenchman, following team Eugene Laverty unfortunate retire on lap 12, consequence of a technical problem he sustained while he was on the lead. Tom Sykes - the only first row starter to finish the race - completed the podium with a solid 3rd place, after losing some ground from the top in the final part. Best result so far in the season for Leon Camier and the FIXI Crescent Suzuki Team, as the tall British rider finished 4th ahead of a sore Chaz Davies (BMW Motorrad GoldBet) and Michel Fabrizio (Red Devils Roma Aprilia).

Camier's team mate Jules Cluzel got the better of Carlos Checa (Team Ducati Alstare) on the last lap, finishing 8th. Pata Honda Team's unfortunate first race of the day saw Jonathan Rea retiring due to a technical problem and Leon Haslam pulling in after losing the feeling in both arms, as the 30 year old from Derby was trying to compensate the lack of strength in his injured left leg. 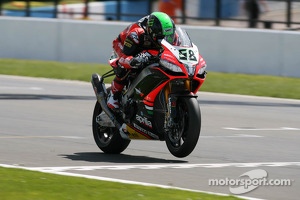 Eugene Laverty is the winner of Race 2 at Portimao. The Irishman, back on the podium after the Italian round at Monza, managed to score his 4th victory of the season: of the seven wins achieved so far in his WSBK career, six of them came in the second race of the day.

Eugene Laverty: “Race 1 seems to be cursed for us this year, especially on tracks like this one and Aragon where I had the right pace to take a double win. In any case I'm not one to complain. I was really trying hard for this win and I'm pleased to have been able to do it dominating from the first to last lap. I'm still in the title chase even with a few too many DNFs, but we are growing race by race and I'm confident about the upcoming rounds.”

The only rider able to keep up with the winner, at least in the first half of the race, was Jonathan Rea. The Ulsterman was edged out of 2nd place in the closing stages by Sylvain Guintoli, who completed the third one-two for the official Aprilia team in 2013 - after the total domination of Round 1 at Phillip Island.

Tom Sykes, following a very early crash during the sighting lap at Turn 2, managed after several attempts, to make his way back to the pits, from where he started the race. Towards the end of Lap 1 the Englishman had to pull in again but, after returning to the track for the third time, with no chances left for a top-15 finish, Sykes showed an incredible pace and even set the new lap record in 1'42.475.

Tom Sykes: “I expected the first race to be just as close as it was but I was struggling a little bit with race performance. Portimao is not one of my strongest circuits and still we could fight for the win. In race two the fall was my fault because in turn one on my out lap I ran over the kerbstone on the inside. We had made improvements on the bike for race two and we proved that was the case because we went on to break the lap record. I feel I have let a few people down but I do not want to be too hard on myself as it is the first mistake I have made for a long time.”

The works Kawasaki team had something to cheer anyway, as Loris Baz finished fourth ahead of Chaz Davies, a tenacious Carlos Checa and Jules Cluzel. An excessive rear-tyre wear forced Marco Melandri to ride defensively to a 12th place at the flag. The issue that hampered the performance of the Italian rider is currently being analysed by Pirelli. A technical problem is the reason behind the withdrawal from Race 2 by Leon Camier on the twelfth lap.

A thrilling and spectacular 4-way finale was the highest point of an incredible race, won by Sam Lowes (Yakhnich Motorsport Yamaha) over Mahi Racing Team India duo of Fabien Foret and Kenan Sofuoglu. Thanks to his fourth consecutive win of the season, the Brit extends his Championship lead to 39 points on the defending WSS Champion. Rookie and potential podium finisher Michael van der Mark (Pata Honda World Supersport) ended up in fourth place.

All four riders waited for the closing stages to give everything they had, but Lowes' last move at Turn 11 on Foret proved to be a successful one as the pole-sitter managed to stay on the lead up to the chequered flag, while the Frenchman and Sofuoglu kept contesting the remaining podium positions.

Van der Mark had his shot at the front in the closing stages, but once being passed back by the hungry trio he had to settle for an encouraging 4th, especially considering his fitness condition. Sheridan Morais (PTR Honda) and Jack Kennedy (Rivamoto Honda) mixed up front in the early part, eventually finishing 5th and 6th respectively despite a big gap from the front runners.