Melandri and Laverty take top of podium in turns at Monza

Monza, Sunday 12 May 2013 – Round 4 of eni FIM Superbike World Championship drew to its highest point today with two incredible races, won by Marco Melandri (BMW Motorrad GoldBet) and Eugene Laverty (Aprilia Racing Team) respectively. Of the 47,046 overall spectators attending during the three days, the ones who went for the Sunday trip to Monza’s Autodromo Nazionale enjoyed an amazing show of talent, close and unpredictable racing until the finish line.

Protagonists of the round were also Tom Sykes (Kawasaki Racing Team) and Sylvain Guintoli (Aprilia Racing Team), who raced up front to create with the two winners of today a breathtaking 4-way battle for the victory in both races.

Marco Melandri was the winner of a thrilling and ultra-close first race, following a spectacular and highly entertained battle throughout the 18 laps.

The 11th race win for the home rider - his maiden on the Italian track - was a perfect display of racecraft, as Melandri entered the final lap in 3rd position and immediately overtook Tom Sykes at Turn 1, then made a successful move on Eugene Laverty for the lead. The works Aprilia Rider regained first position at the "Ascari" chicane, but the eventual winner was not happy with second place and got along the inside of the Irishman at the last turn, while Sykes tried to take advantage to snatch the victory from both rivals.

The three riders crossed the line side by side, with Melandri winning by 0.085 seconds over Tom Sykes and by 0.107 seconds on Eugene Laverty. Sylvain Guintoli (Aprilia Racing Team) was part of the contention for the win but lost ground in the closing stages to finish 4th.

Marco Melandri: “It was an unbelievable day for me. To finish first and second here in Monza is just awesome and it feels great after we had a difficult start to the season. Race one was unbelievable. I knew that my race pace was quite good, even if we struggled a bit in qualifying. Until the chequered flag, I was talking to my RR, telling her ‘go, go, go’ – that was incredible. In Race 2 hen Sylvain made a little mistake, I passed him and then tried to catch Eugene, but he was a bit too far away. Anyway, I was also very happy with second place. Now I am confident because I feel that the feeling with the bike is coming back." 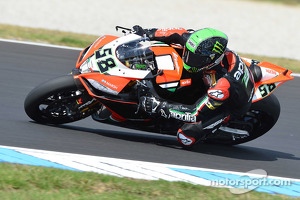 Eugene Laverty has taken revenge over Marco Melandri after first race defeat for the win to achieve a crucial victory in Race 2. The Irishman grabbed the lead on the penultimate lap and defended the position from a competitive Melandri, who set the fastest lap of the race right before the chequered flag in 1'42.379.

With his 3rd race win of 2013, Laverty equals the same number of victories achieved in the past two seasons to close the gap on the Championship leader Sylvain Guintoli (Aprilia Racing Team) to 13 points, with Tom Sykes third with an 18 points gap from the top.

Eugene Laverty: “This was a great day for me. After the podium in Race 1 it was nice to end the weekend with a victory. Especially since I was a bit disappointed because I had a shot at the top step of the podium in the first race as well if I had managed the end differently. The points situation is excellent if you consider the double DNF in Aragon, but I've already left those difficulties behind and I count on doing well at the next round at Donington as well."

The Kawasaki Racing Team rider completed the podium ahead of Guintoli, as both riders were part of a 4-way battle that characterised most of the 18-lap race.

Their race result is still provisional, as after the chequered flag the Aprilia Racing Team requested the Race Direction to analyse last Tom Sykes’ lap, who ran off track, while entering Turn 5 - using the run off area - and rejoined by maintaining his 3rd position and same pace. The appeal by Aprilia was upheld and after Sykes was penalised with one position place penalty, the Kawasaki Racing Team appealed to the FIM Stewards' Panel. Following an analysis of race footage and sector times by Sykes, preceding rider Melandri and following rider Guintoli, decided to reinstate Tom Sykes third in classification. Therefore, this could not be the final verdict, as a further appeal could be lodged by the works Aprilia Team, this time to the International Disciplinary Court (within 5 days), that will eventually take the final decision on it.

5th place for Michel Fabrizio (Red Devils Roma Aprilia), after a close battle with Davide Giugliano (Althea Racing Aprilia). Both riders had to face a strong Chaz Davies, up until the Welshman lost the front at Turn 5 during lap 12, and a fierce Leon Camier (FIXI Crescent Suzuki), 7th at the flag.

Sam Lowes (Yakhnich Motorsport Yamaha) did an almost impossible overtaking manoeuvre on the last lap of World Supersport race to get his 2nd win of the season and become the new Championship leader. The 23 year old from Lincoln had a fantastic drive out of Turn 4 to pass all three riders ahead of him at the following chicane.

Lowes got quickly a small margin on the chasing pack to cross the line in 1st place ahead of Florian Marino (Intermoto Ponyexpres Kawasaki), Lorenzo Zanetti (Pata Honda World Supersport) and Riccardo Russo (Puccetti Racing Kawasaki). The top-5 in today's race, completed by Kev Coghlan (DMC-Racing Kawasaki) put up an outstanding battle throughout all 10 laps.

Reigning Champion Kenan Sofuoglu (Mahi Racing Team India Kawasaki) lost the front at Turn 8 during the 4th lap of the race, while he was on the lead. Team mate Fabien Foret didn't take part to the race after being involved in the multiple crash at Turn 1 that brought to a third red flag - and eventually led to the decision of postponing the Supersport race after World Superbike race 2. Similar misfortune for rookie Michael van Der Mark (Pata Honda World Supersport).