Melandri does the double at Jerez 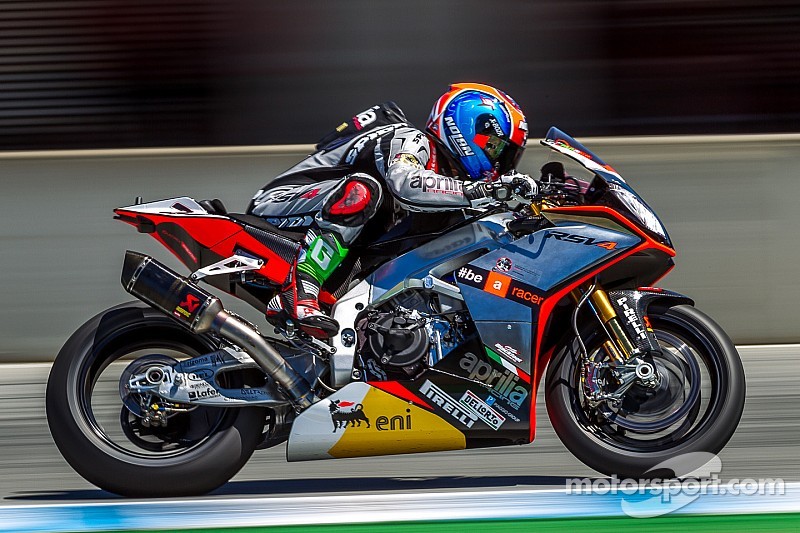 The former 250cc World Champion added another win to his tally...

Jerez (Spain) – Marco Melandri (Aprilia Racing Team) took his second double of the year today after another dominating performance at Jerez in race 2. The experienced Italian rider elevated himself into the lead in the final third of the encounter after overtaking his teammate Sylvain Guintoli, then he pulled away to secure the first position at the chequered flag. The former 250cc World Champion added another win to his tally to become the second most successful Italian race winner in the series after Max Biaggi.

Thanks to another second place finish, Guintoli has narrowed the gap to the top of the standings to 31 points as championship leader Tom Sykes (Kawasaki Racing Team) was 3rd. The podium finishers were awarded with their trophies by Alfa Romeo Ambassador Jorge Lorenzo.

Davide Giugliano (Ducati Superbike Team) endured another difficult race as he was forced to retire at the end of lap 3 due to a technical problem. Both EVO points leader David Salom (Kawasaki Racing Team) and Alessandro Andreozzi (Team Pedercini Kawasaki) failed to make it to the finish line after falling off their respective machines.

There was jubilation for Team Toth BMW who achieved their third point scoring finish of the season courtesy of a 14th place finish by replacement rider Gabor Rizmayer.

Marco Melandri: “After the crash in Race 2 at Laguna Seca I was very disappointed because we could have taken a double win there. This weekend my team and I started off well straight away and changed very little on the bike. My RSV4 performed very well today. The second race was a bit more difficult because of the higher temperatures. I tried to be consistent even though I wasn't really fast at the beginning of the race, but I managed to keep a quick pace and bridge the gap to the top. This was a great Sunday for me. Now I can relax for a few days before getting back on the track.”

Tom Sykes: “A lot of hard riding got me the podium in race two because physically it was really difficult. I had to use a lot of rider input. We made some changes in race two and came close to the front in third place. There was nothing more I could do and tried my hardest. I always thought this weekend could be a little bit uphill. Overall, I have to say I am satisfied, particularly as we had some misfortunes in race one. We did a decent job and we have not lost too much ground. I am very motivated and we have tried a lot of things this weekend. We will continue with our racing season and the guys have worked super hard to cater to my requests and needs here, so it was nice to repay them with a podium finish in race two.”

High stakes for the penultimate round at Magny-Cours