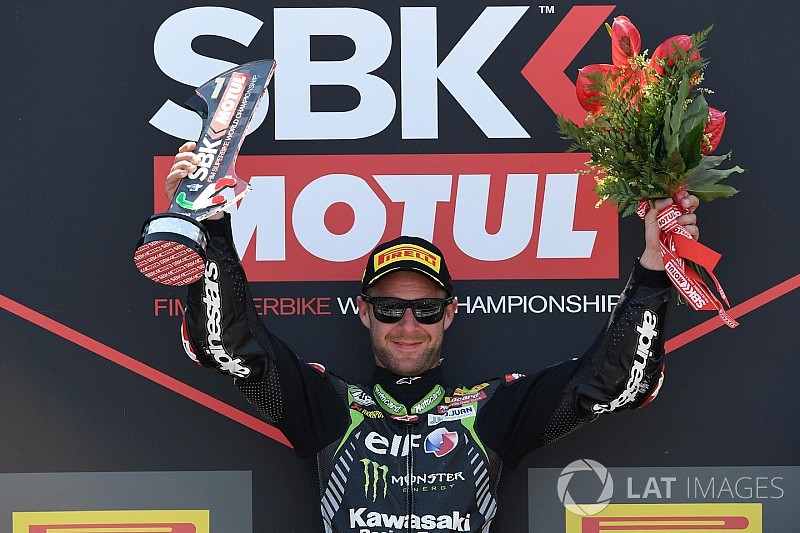 Barni Racing's Xavi Fores took the holeshot into the first corner ahead of van der Mark on the Yamaha and Kawasaki's Tom Sykes, while Rea scythed his way up to sixth from ninth.

A touch between Melandri and Lorenzo Savadori allowed Chaz Davies to leap ahead of them and Rea to fifth at the Carro hairpin, though Melandri would seize the place from his Ducati teammate after a small scrap at Tramonto on lap two.

Rea attempted to demote Davies further at Rio on lap three, but ran wide at the final part and allowed the Ducati rider back through.

At the front, Fores' charge for a first podium since Aragon came to an end when his Panigale expired at Tramonto.

This promoted van der Mark into the lead, with Melandri taking second from Sykes two tours later, while Rea made a move on Davies stick at Carro on lap four after the latter ran slightly wide at the corner before.

Sykes succumbed to the advances of his KRT teammate at Turn 3 on lap seven, with Rea soon engaging with Melandri for second.

Melandri and Rea carved each other up across the eighth lap, with the Kawasaki rider taking second by jamming his ZX-10RR up the inside of the Italian at Carro.

This battle allowed van der Mark to open up a lead of 1.5 seconds, though Rea had slashed this to just 0.6s with nine laps remaining.

Rea made several enquiries for the lead at Turn 3 in the latter stages, but van der Mark resisted these challenges. With three laps remaining, Rea threw his Kawasaki up the inside of van der Mark at Turn 2 to take the lead.

Van der Mark tried to resist around the outside, but he to yield. The Yamaha rider piled the pressure on Rea across the final few laps, but Rea got to the line 0.3s ahead for his 10th win of the season and extend his title lead to 92 points.

The lead battle allowed Melandri to close right in, but could not advance on third, with van der Mark just 0.2s further ahead in second.

Davies dropped out of podium contention at mid distance and was a lonely fourth ahead of Sykes, while Alex Lowes completed the top six.

Jordi Torres was an early retirement when his MV Agusta expired, with PJ Jacobsen and Alessandro Andreozzi dropping out of the race late on.