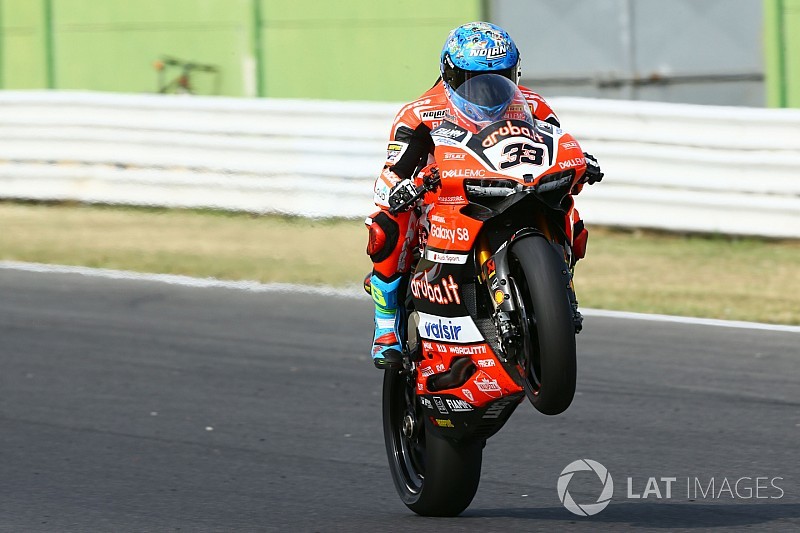 The 34-year-old Italian went from 10th to first in the race where he was the only representative of the works Ducati team, after Chaz Davies was ruled out of the weekend in a Saturday last-lap collision with Jonathan Rea.

A Superbikes frontrunner between 2011 and 2014, Melandri – who stepped in for Davide Giugliano at Ducati this year – has now added a win with the Italian marque to his triumphs with Yamaha, BMW and Aprilia.

At the start, Barni Ducati rider Xavi Fores stormed past pole-sitting compatriot Torres on the run down to T1, as Saturday race winner Tom Sykes charged from ninth on the grid to fourth.

Sykes was soon up to third, overtaking Aprilia's Eugene Laverty at Turn 9, with teammate Rea following through.

But further progress would prove much difficult for the pair of works Kawasakis, as Torres kept the pair at bay. Holding off Sykes for a number of laps, the Althea BMW rider then went on the attack instead, picking off Fores at Turn 12 on the fifth lap.

Fores followed the new race leader close over the rest of the tour, but his Ducati bike gave out the next time around, leaving Torres at the helm of a four-bike pack.

Melandri was running third at that point already, having overtaken Rea, and when Sykes got too close to Torres under braking at Turn 8 and ran wide, the Ducati works rider was up to second.

He was briefly gapped by Torres, but was soon right on the rear wheel of the Althea BMW, making his first serious attempt on lap 10 at Turn 8 and managing to complete the pass at the very same corner three laps later.

But instead of dropping into the clutches of the Kawasakis, Torres managed to keep in touch with Melandri and was even bringing the gap down when his Althea BMW slowed with a mechanical issue with four laps to go.

This promoted Rea up to second, the championship leader having passed Sykes at Variante del Parco on lap 15 and withstanding a late charge from his teammate to hold on to the runner-up spot.

Yamaha's Michael van der Mark, who led much of the Saturday race but crashed out with a suspected rear-wheel issue, bounced back with a fourth-place finish.

Van der Mark followed teammate Alex Lowes for much of the race, but got past the Brit when Lowes ran wide trying to pass Laverty.

While Aprilia man Laverty slipped behind both Yamahas, he eventually managed to score his first top-five finish of the season after Lowes crashed out ahead.