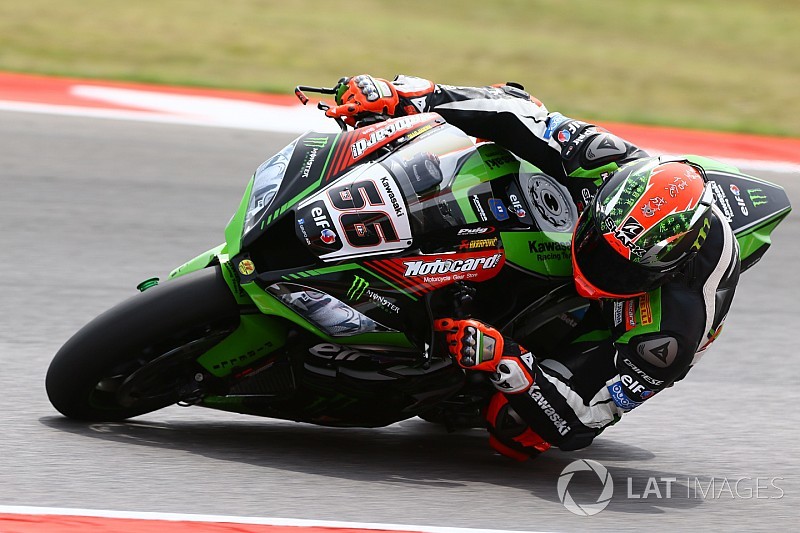 Kawasaki rider Tom Sykes took his second win of the 2017 World Superbike season, inheriting the lead on the last lap as the top three all crashed.

Sykes had started from pole but ran virtually the whole race off the podium, only to take over in the lead with two laps to go after a late crash involving teammate Jonathan Rea and race leader Chaz Davies.

Off the line, as Rea stormed past Sykes on the run down to Turn 1 to take the lead, Yamaha rider Michael van der Mark made a dazzling getaway, finding his way past the two Ducatis and then pulling off a spectacular round-the-outside move on Sykes at Turn 2.

The Dutchman then stopped Rea from making a gap out front and was through at the very start of the second lap, keeping ahead of the championship leader to record his first lap led since his off-season switch to Yamaha.

Rea was soon shuffled down to third, picked off by Davies at Turn 8, while teammate Sykes had slipped behind another Ducati in Marco Melandri and began to drop off from the top four.

Having cleared Rea, Davies ran right behind van der Mark for several laps, but could not sustain the pressure.

As the halfway point approached, the Yamaha rider finally managed to put some space between himself and the Welshman – and, at the start of lap 11, he now had to worry about Rea instead, the points leader clearing Davies at Turn 1.

Van der Mark had been as much as 1.4s ahead after Rea's overtake on Davies, but the Northern Irishman made quick work of the Yamaha rider's advantage.

He was just a couple of tenths off when van der Mark high-sided off his bike at Turn 14, forcing Rea to run wide in the process as the Kawasaki man had to navigate between the falling Dutch rider and his out-of-control Yamaha.

The incident was enough to bring the Ducatis of Davies and Melandri right to Rea's rear wheel. On lap 19 of 21, Davies lunged down the inside of Rea at Turn 1 and their bike made contact, with Rea forced wide and Melandri following his teammate through on the Nothern Irishman.

But there was nothing to split the trio still. On the very same lap, Rea lunged down the inside of Melandri at Turn 14 but ran wide, only to finally complete the pass in the final corner.

The leading trio's formation was broken up at the start of the final lap as Melandri crashed, with Rea now focused on reeling in Davies, trying to line up a late overtake.

Davies entered the Turn 14 Carro hairpin with only a narrow lead over Rea and fell over on the apex, with the Northern Irishman hitting his Welsh rival with his front tyre at low speed and falling over as well.

As Rea remounted his bike, he could only coast home to third, passed by Sykes and the Yamaha of Alex Lowes.

Davies, having taken a hit to his back from the Kawasaki's front tyre, was briefly back on his feet and sprinted to his bike, but couldn't carry on and was stretchered off to receive medical attention. He was taken to the medical centre for a check-up, with Rea, who'd checked up on him on the cooldown lap, saying post-race that the Welshman "seemed okay" but had a sore back.

Randy Krummenacher, Roman Ramos, Lorenzo Savadori and Raffaele De Rosa made up the top 10, with Melandri going on to finish 15th.

UPDATE: Ducati rider Davies will be transported to the Rimini hospital for "further medical assessment" after the incident, the series has confirmed.