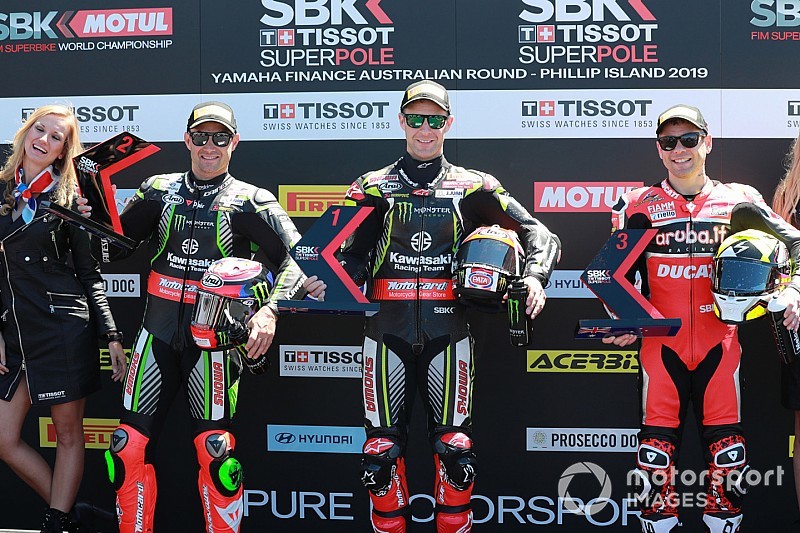 It was Yamaha’s Alex Lowes who set the first competitive lap in qualifying, his 1m30.117s benchmark putting him four tenths clear of the rest of the field.

That time remained unbeaten until exactly the halfway point of the session, when pre-qualifying favourite Alvaro Bautista (Ducati) moved to the top of the timesheets with a 1m30.054s.

Times began to tumble in the final 10 minutes of the 25-minute session, with Haslam first to break the 1m30s barrier by setting a breathtaking lap of 1m29.624s.

Bautista crossed the start-finish line line moments later but couldn’t match Haslam’s chart-topping time, his 1m29.729s lap leaving him at best second on the grid on his WSBK debut.

But Rea managed to demote the Spaniard to third with just two minutes to go as he took pole with a 1m29.413s flyer.

Lowes managed to lower his previous benchmark to qualify fifth, ahead of World Supersport graduate Sandro Cortese (GRT Yamaha), who was an impressive sixth with a time that was just over three quarters of a second off the pace.

Leon Camier qualified 10th on Honda’s return to WSBK as a factory team, seven spots ahead of his teammate Ryuichi Kiyonari.

Bautista's teammate Chaz Davies, who led Ducati's works effort in the recent years, toiled badly in his first qualifying with the new Panigale V4 R as he took 16th place.