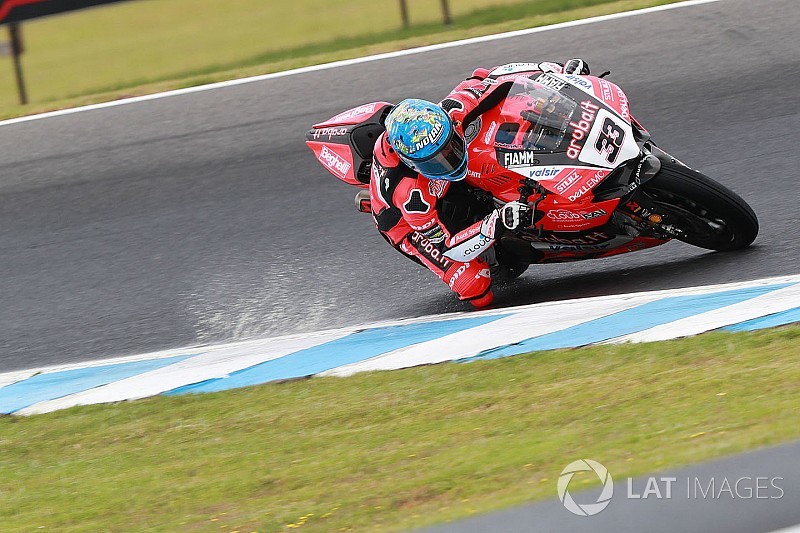 Sykes launched off the line to go a second clear of the field at the start, while Kawasaki teammate Jonathan Rea brushed off his sixth-place qualifying result to move into second at the first corner.

The KRT rider continued to lead for much of the race, with Sykes extending his advantage to almost two seconds, while Melandri slotted into third and began closing them down.

Rea began to mount the pressure on Sykes by mid distance, with the reigning world champion scything his teammate's advantage down to under a second.

However, Rea began to struggle, several looks rear-ward suggesting a possible tyre issue. This allowed Melandri to ease ahead at Turn 4 with eight laps to go and clear away from him.

The Italian hounded Sykes over the next few tours, before blasting past into the first turn. Quickly building a slight gap, Melandri remained unchallenged to claim his second Ducati win.

Behind, Melandri's teammate Chaz Davies passed the ailing Rea on the penultimate lap to take third, and held Barni Racing's and Sunday pole man Xavi Fores at bay to complete the podium.

Rea clung onto fifth at the chequered flag, with Yamaha's Alex Lowes recovering from a scrappy opening lap and winning a hard battle with teammate Michael van der Mark to take sixth ahead of Honda's Leon Camier.

Eugene Laverty was unable to convert his front row start to a podium, the Aprilia rider slipping to eighth at the chequered flag ahead of van der Mark and Orelac Racing's Leandro Mercado.

MV Agusta's Jordi Torres dropped out of the battle for the top 10 with a late technical issue, while Yonny Hernandez crashed out of his maiden WSBK outing with nine laps remaining. Wildcards Wayne Maxwell, Troy Herfoss and Daniel Falzon also retired.

Aprilia's Lorenzo Savadori was a non-starter after fracturing his left collarbone in a crash during Superpole, and will sit out Sunday's race also.