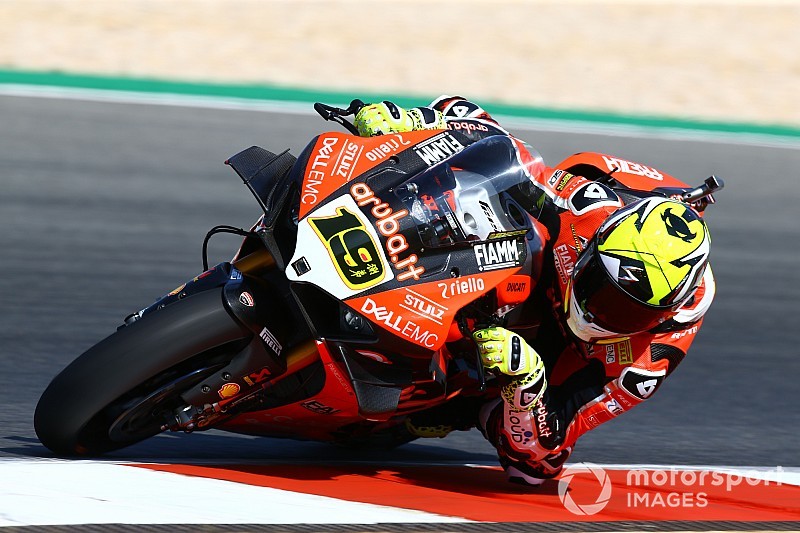 Alvaro Bautista resisted a late charge from Jonathan Rea to claim his first World Superbike victory since June’s Misano round in the second feature race in Portimao.

Bautista – still carrying a shoulder injury from a crash at Laguna Seca – made up for a poor launch from second to overhaul the Kawasaki riders ahead of him, finally leading Rea to the chequered flag by just 0.111 seconds.

Championship leader Rea, just as he did in the first two races of the Portimao weekend, grabbed the holeshot while Puccetti’s Toprak Razgatlioglu, the second works Kawasaki of Leon Haslam and Alex Lowes on the Yamaha slotted in behind.

Dropping to sixth at the start, Bautista quickly made his way back up to third, and briefly took the lead after blasting past Rea and Razgatlioglu on the pit straight on lap six.

However, Razgatlioglu outbraked the Ducati into Turn 1 to grab the advantage, with Rea unable to find a way back through on Bautista.

Razgatlioglu was powerless to stop Bautista powering past on the run into Turn 1 next time around, and steadily began to move clear by a handful of tenths as Rea demoted the Puccetti rider at the same time.

Bautista stretched his lead up to 1.4s with five laps remaining, but Rea soon started to eat into his advantage, getting the gap down to just eight tenths as the pair started the last tour.

Rea gouged time out of the Ducati rider across the final lap, with the pair exiting the last corner onto the pit straight line astern.

But Bautista clung on for victory by just over a tenth – a win which left him visibly emotional on the cool-down lap and back in parc ferme following his spate of crashes in recent rounds.

Rea’s points lead has now come down to 91, putting him in a position to potentially wrap up a record fifth world title next time out at Magny-Cours.

Razgatlioglu held onto third for his eighth podium of the season in a week where a rumoured move to Yamaha for 2020 gathered serious momentum.

Lowes – whom Razgatlioglu is set to replace next year – took top Yamaha honours in fourth ahead of Haslam, with Loris Baz getting the better of Michael van der Mark (Yamaha) to score sixth on the Ten Kate-run R1.

Marco Melandri was eighth on the GRT Yamaha, with Tom Sykes slipping to ninth on the BMW ahead of the sister GRT bike of Sandro Cortese.

Chaz Davies once again struggled to make progress from his fourth row starting spot, with a technical issue late on dropping him out of the points to 16th.