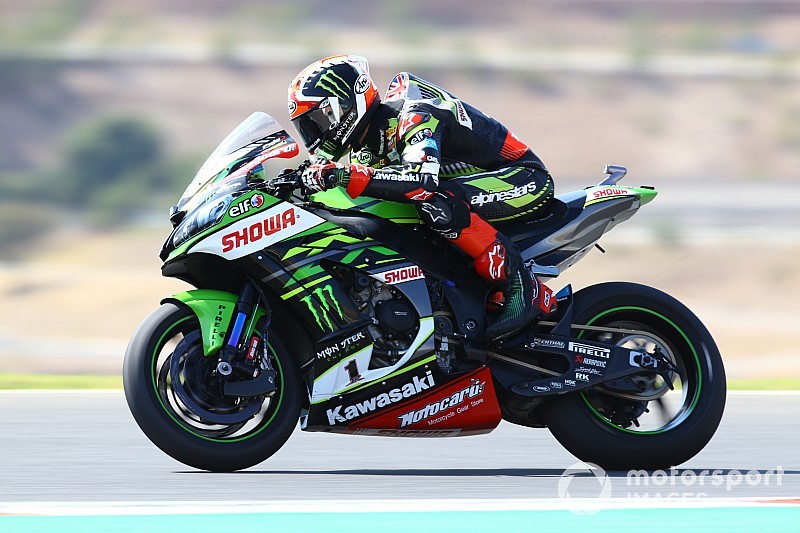 The reigning WSBK champion was one of the last to head out on circuit on the qualifying tyre, and managed to get a lap together to snatch pole by just over a tenth with a new track record of 1m40.372s.

Ducati’s Bautista – who crashed in FP3 earlier on Saturday morning – set the early pace on the race tyre with a 1m41.326s, with Rea deposing Kawasaki stablemate Toprak Razgatlioglu for second after 10 minutes of running.

Rea’s next lap of 1m41.143s put him provisionally pole, though this came under threat soon after as Bautista took to the track with the qualifying tyre.

The Ducati rider failed to set the timing screens ablaze, though, and could only produce a 1m41.098s, which he was unable to improve on next time around.

Tom Sykes – whose BMW future was confirmed this morning – put in the first real challenge for pole, firing in a 1m40.483s to dip underneath the lap record with a minute to go.

Rea’s sector times on his qualifying tyre lap proved slightly quicker than his former teammate’s, and he hooked the lap up to secure his fourth pole of the season.

Sandro Cortese was top Yamaha runner in third on the GRT R1, with the second Kawasaki of Leon Haslam heading the second row in fourth.

Alex Lowes rounded out the top five on the Crescent-run Yamaha, with Bautista shuffled back to sixth in the end ahead of Pedercini Kawasaki’s Jordi Torres and the second GRT bike of Marco Melandri.

Markus Reiterberger briefly held a front row place in the closing stages, though the BMW rider was quickly dumped to ninth ahead of Yamaha’s Michael van der Mark.

Ducati's Chaz Davies looked a pole threat in the closing stages on the second factory Panigale V4 R, but his 1m41.349s effort was only good enough for 12th behind the Barni-run Ducati of Michael Ruben Rinaldi.

Razgatlioglu was only 13th in the end, while Ten Kate Yamaha’s Loris Baz looked set for a better result than 15th before crashing at Turn 11 while setting the timing screens alight on his qualifying tyre lap in the closing stages.