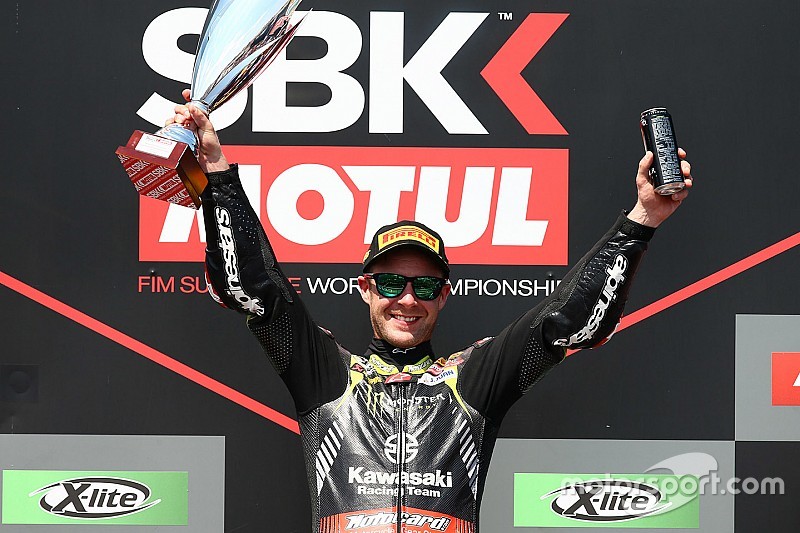 Jonathan Rea took a dominant World Superbike win in the opening race at Portimao over Marco Melandri to extend his championship lead to 104 points.

Melandri grabbed the holeshot into the first corner at the start, but ran wide and allowed Rea through, while Lorenzo Savadori moved into third ahead of poleman Aprilia teammate Eugene Laverty.

Laverty's race would last just one more corner, as Barni Racing's Xavi Fores crashed into him under braking for Turn 3, eliminating both on the spot.

Rea was shadowed by Melandri and Savadori for the opening handful of laps, but soon began to open up an advantage of close to a second.

By lap 10, the KRT rider had eased two seconds clear of the chasing pack, and remained unchallenged through to the chequered flag to claim his 11th win of the season and the 65th of his career.

Savadori piled the pressure on Melandri for second, but his challenge ground to a halt at the start of lap 12 when he crashed out of a maiden podium place at Turn 1.

This promoted Yamaha's Michael van der Mark up to the final rostrum spot, though the Dutchman could do nothing to close down his two-second deficit to Melandri in front.

Ducati's Chaz Davies made a storming start from 14th to sixth after the opening corners, and ran line astern with van der Mark in the early laps.

His pace soon faded, however, and the Welshman settled into a lonely fourth to secure pole position for race two. Davies' fourth also gifts Rea 12 more points over him, the Kawasaki rider now 104 clear.

Rea's KRT stablemate Tom Sykes completed the top five and will start alongside Davies on Sunday, as will Althea BMW's Loris Baz, who usurped the MV Agusta of Jordi Torres late on to take sixth.

Toprak Razgatlioglu was eighth aboard his Puccetti Kawasaki, with the third factory Ducati of Michael Ruben Rinaldi six seconds further back in ninth.

Alex Lowes completed the top 10, but was forced into a recovery ride after being dropped to the rear of the field by the Turn 3 incident between Fores and Laverty.

The Yamaha rider's fellow Briton Leon Camier had been 10th in the early stages on the Ten Kate Honda, but retired on lap 11 with a technical issue.