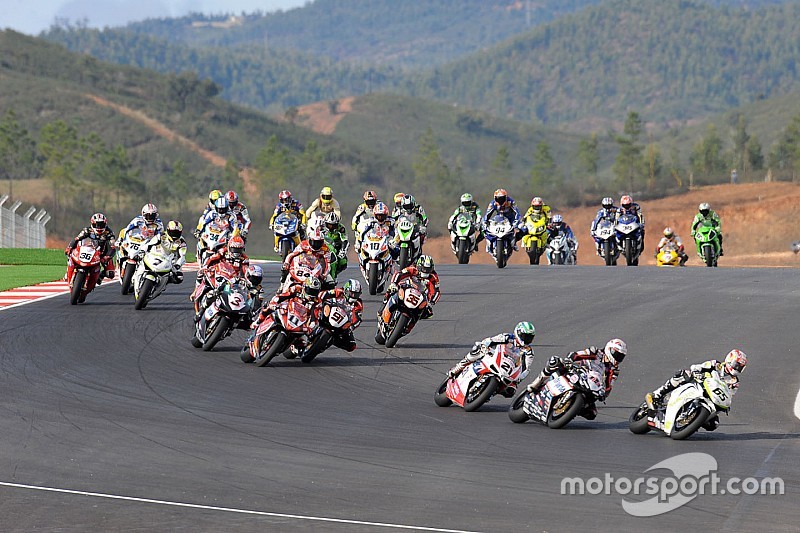 In the early years of the World Championship, Estoril hosted four races, in 1988 and 1993, while the brand-new Algarve track took over in 2008 and has become a fixed venue since then.

Twenty-two Portuguese riders have entered at least a practice session in the World Superbike class and 14 of them were race starters. Among them, the most successful is Alex Vieira, the only Portuguese able to win a race, at the Osterreichring, 1989 R1, and to start from pole - at Hockenheim in 1988.

Some notable moments at the Algarve track

2008 The first weekend at the new track was a Troy Bayliss demonstration: the Australian was on his farewell weekend and shattered the opposition, taking pole by almost 2.5 seconds over Cal Crutchlow and dominating both races. On that weekend, a young Jonathan Rea switched from the World Supersport Championship to World Superbike, impressing the world with a third place on the grid and a fourth position finish in Race 1.

2009 The Algarve hosted one of the most thrilling season finales in history as Noriyuki Haga and Ben Spies had the title on the line, with the Japanese leading the American by ten points. Spies took pole and rocketed away at the start of Race 1 while Haga, only tenth on the grid, had to climb through the field but eventually fell on the seventh lap while running fifth. In Race 2, Spies controlled his rivals to finish a comfortable fifth, while Michel Fabrizio won from Haga: the Japanese had squandered an 88-point advantage during the course of the season and lost the title to Spies.

2010 The Algarve went from being the season finale to the second round, in March, and was a taste of things to come as Biaggi and Haslam fought closely in both races, with the Italian coming home with a double.

2011 World Champion-to-be Carlos Checa got the best of his rivals in Race 1, improving the pace when needed, and taking the lead from Sylvain Guintoli four laps from the end. In Race 2 Marco Melandri gave Yamaha the last of their 74 wins to date. Eugene Laverty completed the ideal farewell race for the Japanese manufacturer by finishing second.

2012 Marco Melandri's championship hopes took a serious knock in Race 1 when he fell on the opening lap and had to be taken to hospital for checks. The wins went to Sykes and Laverty; Tom took over from Melandri for second spot in the championship, 30.5 points from Biaggi who would go on to win the title by only half a point on the following weekend at Magny-Cours.

2013 Melandri gave BMW their tenth win in Race 1 and Eugene Laverty dominated proceedings in Race 2, but drama unfolded on the sighting lap as pole man Sykes fell at Turn 2, thus having to start from the pits.

2014 Tom Sykes dominated Race 1 before, in a wet Race 2 the two Aprilias were hunting down Jonathan Rea, race leader from the opening lap; however, just as Melandri and Guintoli were in sight of the Honda rider, the two Aprilias made contact in the shadow of the VIP tower. Only Guintoli was able to climb back on his bike, to finish seventh, while Melandri was out.

Nilox Portuguese Round to mark halfway point of the season