Marco Malandri qualified sixth on the provisional second row, directly followed by Chaz Davies who was seventh on the third row.

Today, the BMW Motorrad GoldBet SBK Team finally had a Friday with weather conditions which allowed them to work properly. At the last few rounds, the teams of the FIM Superbike World Championship faced bad weather on Fridays, which lost them important time for setting up the bikes. 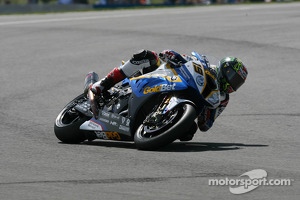 However, today in Portimão (POR) it was different, there was partial cloud but after a short rain shower in the early morning, it was dry. BMW Motorrad factory riders Marco Melandri (ITA) and Chaz Davies (GBR) used the day to start setting up their BMW S 1000 RRs for the sixth round of the season.

In the first qualifying practice in the afternoon, Marco qualified sixth on the provisional second row, directly followed by Chaz who was seventh on the third row.

Marco Melandri (Fastest lap Free Practice: 1:44.512 min - P5 / Fastest lap Qualifying Practice 1: 1:44.026 min - P6): “Today we worked on the race set-up of the RR in order to prepare for Sunday. So I preferred to use only used tyres and I was not looking for a fast lap time. The test in Aragón confirmed the direction we have to head towards and, after Donington, we made a step forward.

We continued working in this direction today and improved the front feeling. Tomorrow we will use the same strategy and we will also work on improving the rear. The track conditions were difficult because in some sectors the asphalt is in a pretty bad condition, it is as if there were waves. Overall it was a good day and I am satisfied.”

Chaz Davies (Fastest lap Free Practice: 1:44.462 min - P4 / Fastest lap Qualifying Practice 1: 1:44.245 min - P7): “We worked on the chassis and trying to find the right balance for this circuit. Portimão is quite difficult. We were just trying to get a front feeling that I am happy with to give me a little bit more confidence to turn the bike in and then to set me up for the corner exit.

That was the main thing we focused on today. We have some more work to do but there is still a long time until race day. We will check the data tonight and see if we will find something else in order to further improve tomorrow.”

Serafino Foti (Sport Director BMW Motorrad GoldBet SBK Team): “Today was a positive day, both in the Superbike class and in the Superstock class. Marco worked on preparing for Sunday‘s races and only rode on used tyres and on them he showed a good race pace.

He feels good and is comfortable on the bike. Tomorrow, with new tyres, he will improve his lap time. Chaz only has to improve in the last sector, where he loses some tenths of a second, we are analysing data to find the best way to help him. In summary, I am very confident for the races."

Andrea Dosoli (Technical Director BMW Motorrad GoldBet SBK Team): “Today was one of the first Fridays of the season on which we could work and we are glad that we had dry conditions. At last week’s test at Aragón, we tested a few ideas and today we could prove that some of them are working also here in Portimão.

Even if the track conditions are worse than we expected, it seems that the track has become bumpier, our ideas are still working. Both riders have been working on setting up the bike, rather than looking for performance on one flying lap.

Marco has improved his feeling for the front end and tomorrow he would like to work a little bit more on the rear because it is a bit too nervous, especially on the bumps.

Chaz is trying to get a better front feeling in order to better absorb the bumps and we still need to understand why he is losing a bit in the last sector. We are confident that during the night we can fix both issues and that we will be ready to fight in tomorrow’s qualifying practice. Our target is to start the races from the first two rows".