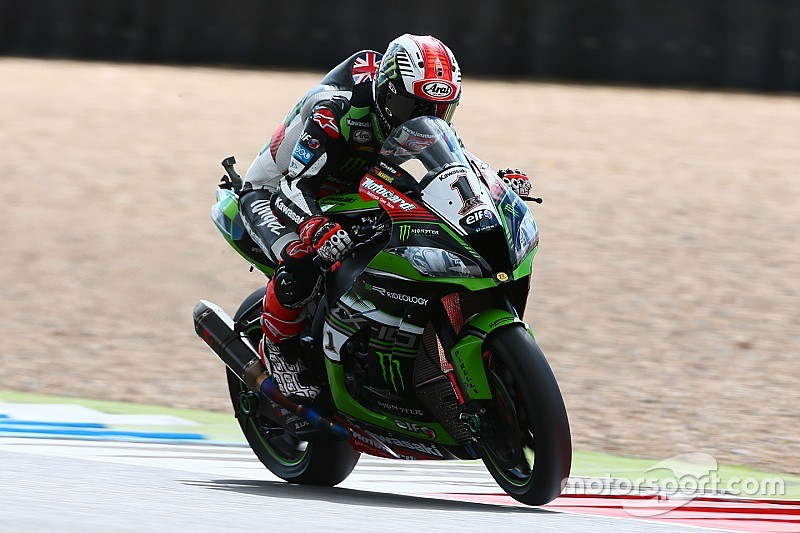 World Champion outpaces rivals on day one at Assen, with Davies and Sykes also in top three

Friday’s action at the Acerbis Dutch Round saw Jonathan Rea (Kawasaki Racing Team) set a marker for his rivals with a 1’35.383 lap to top the FP2 timesheet as he rode consistently fast around the TT Circuit Assen. He was joined by Chaz Davies (Aruba.it Racing - Ducati) and Tom Sykes (Kawasaki Racing Team) in the top three on the combined Friday timesheet, with Davies trailing the World Champion by +0.112s and Sykes being +0.149s behind his teammate.

Rea has an excellent record at the Dutch venue having won nine WorldSBK races there and having taken double victories in the last two visits to the Netherlands. His Friday pace suggests he will be as strong as ever on Saturday and Sunday after his excellent start to 2017 so far.

Behind the top three in FP2 were Jordi Torres (Althea BMW Racing Team) and Lorenzo Savadori (Milwaukee Aprilia), who both made the top five. Savadori improved significantly from FP1 having had technical problems which hampered him in the morning outing.

Van der Mark could not improve his time in FP2 having made a good start to his home round in fourth in FP1. Meanwhile, it was not a great day for Lowes as the Englishman first crashed in FP1 and then had a high-speed crash on the Yamaha YZF R1 in FP2. He ended up ninth overall, having been outside the top ten in the morning session.

Bradl also crashed in FP1 and concluded the day down in 13th, with his Red Bull Honda World Superbike Team behind him in 14th, meaning both will ride in Tissot Superpole 1 on Saturday morning.

There was also an FP2 crash for Leandro Mercado (IODARacing), leaving the Argentine rider down in 18th on the timesheet.

Earlier in the day Sykes set the FP1 pace with a 1’35.676 lap, placing him ahead of his teammate Rea and Welshman Davies in the top three on the morning timesheet.

The WorldSBK riders will be back on track at the Acerbis Dutch Round for FP3 at 8.45am local time.