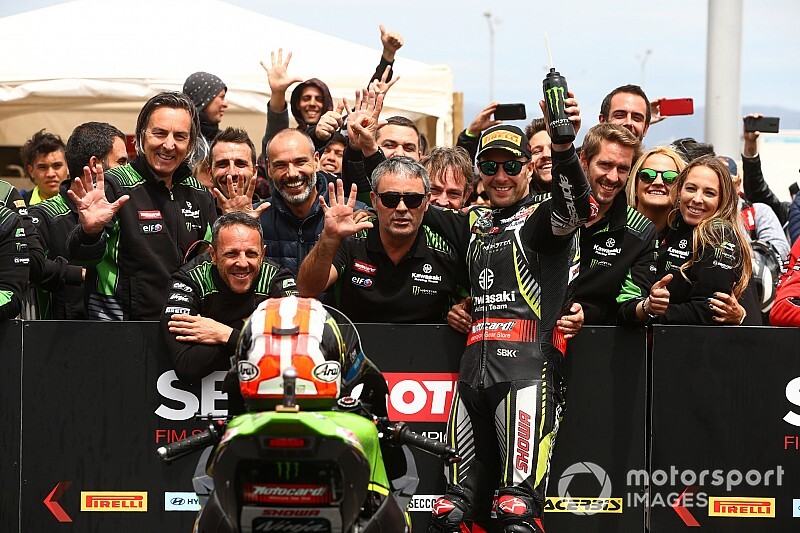 Reigning world champion Jonathan Rea eased to his 13th win of the 2019 World Superbike season, after beating Alvaro Bautista in the Superpole race at Villicum.

After six riders opted to sit out the first race of the weekend over dangerous track conditions on Saturday, a full WSBK field lined up for the 10-lap sprint contest.

Kawasaki’s Rea leaped up to second off the line behind Race 1 winner and poleman Bautista and ahead of Puccetti Kawasaki's Toprak Razgatlioglu.

Bautista’s lead was short-lived, however, as Rea scythed up the inside of the Ducati rider at the Turn 7 right-hander and resisted a counterattack into Turn 8 at the end of the straight.

Once clear of Bautista, Rea immediately opened up a lead of a handful of tenths, with his gap close to a second by the third tour.

Rea continued to extend this, though was dealt a scare on the penultimate lap when he lost the front end of his ZX-10RR on the way into Turn 10.

Remaining mounted, he cruised to the chequered flag ahead of Bautista, who in turn was able to gap the chasing Razgatlioglu – who secured the independent riders’ title with his third-place finish on Saturday.

The sister works Ducati of Chaz Davies was lucky to escape a moment exiting Turn 9 on the first lap while duelling with Yamaha’s Michael van der Mark, and was forced into a recovery ride after dropping to seventh.

Using the sheer grunt of the Panigale V4 R on the straights, he quickly disposed of the Yamahas of Sandro Cortese (GRT), van der Mark and Alex Lowes.

He was able to eat into Razgatlioglu’s gap ahead of him, but ran out of laps to mount an assault on the final podium place.

Lowes was the top Yamaha runner across the line in fifth ahead of van der Mark and Cortese, with Kawasaki’s Leon Haslam, Tom Sykes on the BMW and home hero Leandro Mercado (Orelac Kawasaki) rounding out the top 10.

Ten Kate Yamaha rider Loris Baz returned to action on Sunday after missing Saturday’s race with a sprained wrist and a mild head injury following a crash at the start of Superpole.

Unfortunately, Baz suffered an identical off-throttle highside at Turn 16 at the end of the opening lap and was relegated to onlooker for the rest of the race.

Rea’s victory puts him on pole position for this final feature race later today, with Bautista and Razgatlioglu making up the front row.