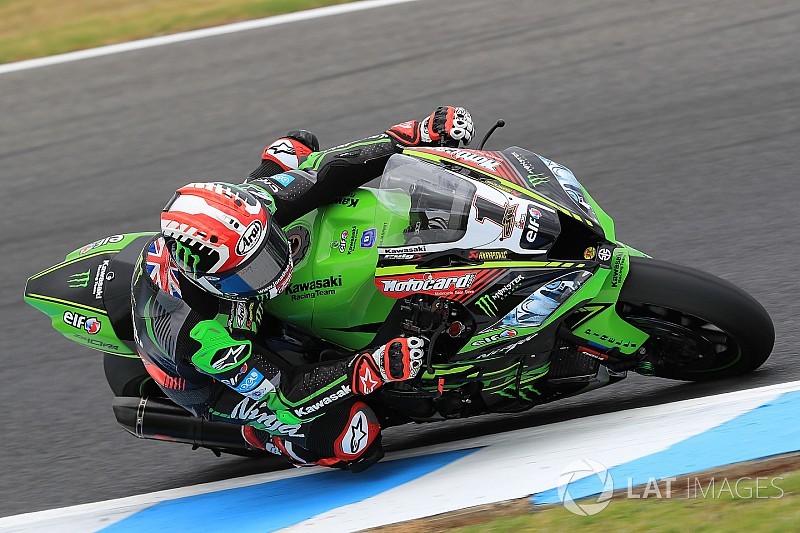 Reigning World Superbike champion Jonathan Rea was fastest on the final day of pre-season at Phillip Island despite suffering a small crash during the first session.

After Monday's running was heavily affected by wind, conditions were much better for the final day of testing ahead of the 2018 season.

Rea crashed heavily during the morning session on Monday and opted against running again in the afternoon due to the conditions. Keen to make up for lost track time, the Kawasaki rider was the early pacesetter in a flurry of quick laps with a 1m32.290s.

The Northern Irishman improved to a 1m31.396s over the next few minutes, before Yamaha's Michael van der Mark just edged ahead of Rea with a 1m31.170s when the session was stopped briefly following a crash for Barni Ducati rider Xavi Fores at Turn 4.

Van der Mark joined Fores in the Turn 4 gravel trap as the session got back underway, but was able to rejoin the circuit. 20 minutes later, Aprilia's Eugene Laverty and Tom Sykes on the second factory Kawasaki traded the top spot.

As race pace took priority for most in the afternoon, only five of the 22 riders improved on their morning laptimes, with Rea's benchmark keeping him two tenths clear of teammate Sykes.

Monday pacesetter Marco Melandri was a further two tenths back on his Ducati in third, with Laverty fourth following a tumble at Turn 4 late in the day.

Fores was able to get back out for the second session after his crash and improve to a 1m31.076s for fifth, with Van der Mark took top Yamaha honours in sixth after improving to a 1m31.131s in the afternoon.

The Dutch rider's teammate Alex Lowes was a late mover into seventh, edging ahead of Honda rider Leon Camier. Loris Baz on the Althea BMW and Lorenzo Savadori (Aprilia) completed the top 10, while Chaz Davies was a low-key 11th on the second factory Ducati.

Puccetti Racing's Toprak Razgatlioglu was once again top rookie in 12th, though was unable to improve on his 1m31.822s from the first session after a late technical issue on his customer Kawasaki.