World Superbike champion Jonathan Rea has blasted Tom Sykes after the BMW rider forced him off track on the opening lap of the first race of the season at Phillip Island.

Poleman Sykes was leapfrogged by the Kawasaki rider off the line, with Rea leading the field through the opening handful of corners.

Sykes got a run on Rea through the Hayshed section of the circuit and carved up the inside of him on the way into the Lukey Heights left-hander.

But the BMW rider made contact with Rea and forced him off circuit, with Rea rejoining down at the back of the field after a lurid trip through the gravel.

Rea said it wasn’t the first time something like this has happened – referencing the pair’s clash at Brno in 2018 when they were Kawasaki teammates – and claims “it won’t even be the last time”.

“Tom arrived inside [of me] Turn 4, then I responded to his overtaking,” said Rea. "The only thing I really know is that I was hit from behind.

“But I don't understand, they were the first laps of the first race of the season.

“But it is not the first time he has behaved this way, he has already done it in the past and when it happened in Brno in 2018 it went wrong. It won't even be the last time he does it.”

Rea managed to recover into the points after a handful of laps, but eventually crashed at the fast Hayshed section and retired.

Explaining the tumble, he said: “When I tried to pass [Barni’s Michael Ruben] Rinaldi, I lost the front and the rear together and I ended up on the ground.

“It's frustrating, because we weren't doing badly until then. Maybe I didn't react the best in the comeback, so I learned something for myself.”

Sykes led the race until lap 12, after which he dropped off the lead group and ended up 11.9 seconds off the lead in ninth.

The Yorkshireman was apologetic for the contact with Rea, but claims Kawasaki didn’t let him in to see the world champion to apologise in person.

“In the first laps we fought a bit and we came together in a couple of turns, one was at Turn 3, where we almost touched each other," he said. “Then he came back to a point where I was slower and I was unable to pull my bike up, so there was a contact.

“I'm sorry, because it's never nice to touch each other, especially when you're fast. It's a shame he didn't manage to finish the race.”

“I haven't talked to Jonathan. I wanted to go a few times, but his team told me to give him some time. I just wanted to apologise to him for what happened.

“But I was advised not to go at that moment, it is understandable that maybe he doesn't want to talk to me. Maybe I'll try to talk to [him] later.” 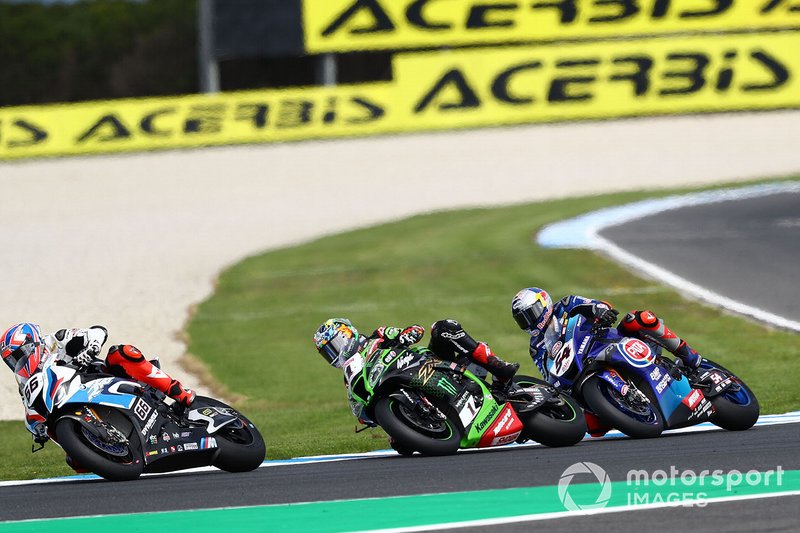