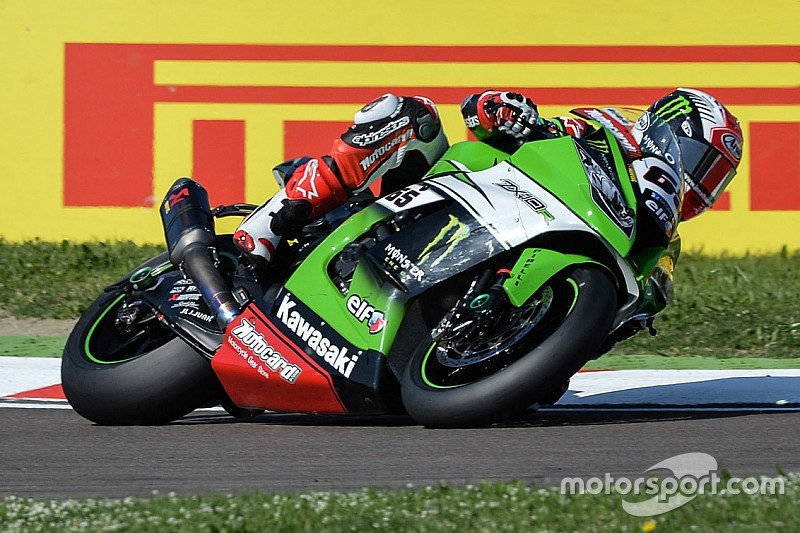 Jonathan Rea (Kawasaki Racing Team) has taken his ninth victory of the season in the opening race of the day at Portimão.

After twenty action-packed laps, that saw the first flag-to-flag race of 2015, Jonathan Rea (Kawasaki Racing Team) has taken his ninth victory of the season in the opening race of the day at Portimão, coming home 9.384s ahead of team mate Tom Sykes and with an even bigger margin on Chaz Davies (Aruba.it Racing – Ducati Team), who completed the podium.

More than two thirds of the encounter saw the Kawasaki pair play a game of cat and mouse until, with 6 laps to go, the few drops - that were already falling down - turned into heavy rain. All but Sykes came in to change to wet tyres with Sykes following suit the following lap. The duo fought it out until Sykes made a mistake caused by a small and temporary technical problem, allowing Rea to notch up his 24th career win.

Ayrton Badovini brought the BMW Motorrad Italia entry home in 7th ahead of Leandro Mercado, who experienced his first ever flag-to- flag race on the Barni Racing Ducati.

Michael van der Mark (Pata Honda World Superbike Team) recovered to 9th after an off track excursion as Alex Lowes (Voltcom Crescent Suzuki) rounded out the top-10 after running wide in the early stages of the race.

Rea pulls away to take fourth double of the season