Who will be crowned champion in Jerez?

The eni FIM Superbike World Championship riders are gearing up for the last round of 2013, that will take place this weekend at the Circuito de Jerez, Spain. The last time the Andalusian track hosted an event of the series was in 1990, with the Spanish Round being the season opener for WSBK.

Tom Sykes (Kawasaki Racing Team) enters the final showdown in confident mood after the double win at Magny-Cours, that allowed the Brit to extend his lead to a comfortable 37 and 38 points over the two remaining title contenders, Eugene Laverty and Sylvain Guintoli (Aprilia Racing Team). With such a considerable margin over the rivals, Sykes could be crowned new World Superbike Champion already after the first race by finishing in third place, in case the two opponents would eventually take the top-two spots on the podium.

All the factory teams and most of the private ones have previously tested at Jerez, meaning the riders will not take too long to get up to speed on the Spanish venue. 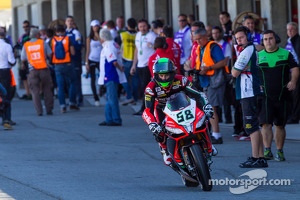 Eugene Laverty heading out for superpole

Team BMW Motorrad GoldBet line-up will turn into a trio this weekend, as regular riders Marco Melandri and Chaz Davies will be joined by STK team mate Sylvain Barrier, who is set to make his long-awaited WSBK debut after retaining the title in the FIM Superstock 1000 Cup in front of his home crowd at Magny-Cours.

Local rider Toni Elias (Red Devils Aprilia) is targeting a strong result at Jerez, a track he knows well and where he won during his best ever 250cc World Championship season (2003) and in 2010, first race victory of his title-winning season in Moto2.

Leon Camier (FIXI Crescent Suzuki) is down to race despite not being 100% after the injury suffered at Nurburgring. Former BSB Champion will undergo further checks at Jerez prior to the round, before a final decision on his participation to the event. Similar situation for Loris Baz, who is eager to jump on his Kawasaki Racing Team ZX-10R after sitting out from the last three rounds.

Javier Fores will replace fellow Spaniard Carlos Checa for the last outing of what has been a difficult season for Team Ducati Alstare. The 28 year old from Llombai has previously raced in the series, when he stepped in for injured James Toseland to race with Team BMW Motorrad Italia for the last three rounds in 2011.

Australian FX Superbike Champion Broc Parkes will make his comeback to the series by tackling the event onboard the Yamaha YZF-R1 of the YART Team.

After clinching his first-ever World Title at Magny-Cours, Sam Lowes (Yakhnich Motorsport Yamaha) will be back on track to contest his last World Supersport race before moving to the Moto2 World Championship. The battle-hungry youngster from Lincoln will have a final chance for another epic challenge against Kenan Sofuoglu (Mahi Racing Team India Kawasaki).

Confirmed Pata Honda riders for 2014 Michael van der Mark and Lorenzo Zanetti will try and mix it up for what would be their first ever win in the series – and the maiden one for the team this year. Matthieu Lagrive, last minute substitute for injured Florian Marino at Magny-Cours, will be again on track for Team Intermoto Ponyexpres Kawasaki, and he will be replacing this time Luca Scassa.

Despite the title already assigned last round, the final race for the FIM Superstock 1000 Cup will play an important role for the riders involved, who are looking forward to end up their season in the best possible way.

With 2013 title winner Sylvain Barrier (BMW Motorrad GoldBet) up to his debut in World Superbike, Niccolò Canepa (Barni Racing Ducati) – who is still looking for his first race win of the season - will try and defend his second place in the standings from Jeremy Guarnoni (MRS Kawasaki) and Leandro Mercado (Team Pedercini Kawasaki), who scored one win each in the last two rounds.

Kyle Smith (Agro-on Racedays Kawasaki) is looking forward to the Spanish round boosted by his previous knowledge of the track, after the encouraging performances put up in his first two races in the series.