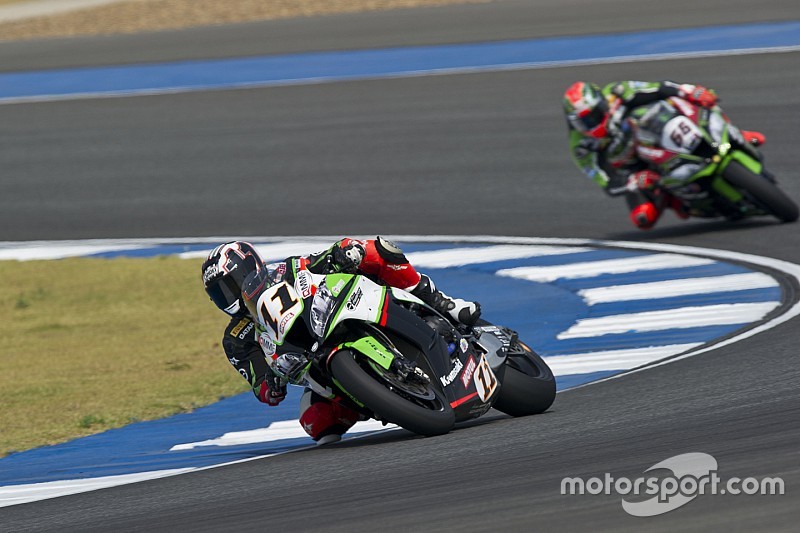 After a gloomier start to the day, the sun came out in Aragón to accompany the first WorldSBK practice session at MotorLand, with Aruba.it Racing – Ducati rider Chaz Davies taking top honours after the first hour on circuit. The Welshman has a fantastic record at the aragonese track and is only one point shy of Marco Melandri in being the most successful WorldSBK rider at MotorLand.

Tom Sykes took the top honours back for Kawasaki Racing Team in the afternoon with weather conditions still good, and a shootout for the quickest lap saw times start to tumble dramatically and the Kawasaki rider come out on top. He is the fastest man on Friday and goes into Tissot-Superpole as a favourite for Pole Position on Saturday.

After a morning session that saw him go second quickest, Honda rider Nicky Hayden suffered a fall in the second session but escaped unharmed to end the day in P7, and it was teammate Michael van der Mark who improved yet further to end the day in P3, just in front of Ducati rider Davide Giugliano.

IodaRacing Team's Lorenzo Savadori put in an incredible lap on his Aprilia to complete the top 5, pushing reigning Champion Jonathan Rea back to P6. Leon Camier improved to P8 to cement MV Agusta within the top ten, and home rider Xavi Fores took his Barni Racing Team Ducati to P9, just ahead of Yamaha's Alex Lowes.

Fores' compatriot Jordi Torres ended the day in P12 on his BMW, meaning a margin of just over a second contained a representative of every manufacturer in an incredibly competitive field for WorldSBK in 2016.

Tissot-Superpole gets underway on Saturday at MotorLand Aragon at 10:30am local time (GMT +2), for the first pole position of the season on European soil to be decided.