Sykes first man through to Tissot-Superpole 2 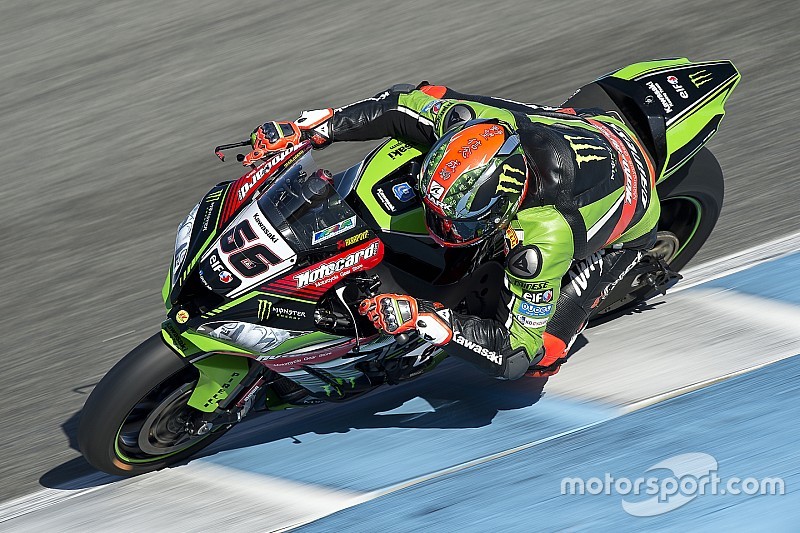 FP2 action began for WorldSBK at 13:30 local time with entry to Tissot-Superpole 2 for the top ten. Xavi Fores (Barni Racing Team) led the charge in the opening minutes of the session before times tumbled with Tom Sykes (Kawasaki Racing Team) putting in the fastest time. By the end, all of the top ten were within seven tenths of a second of each other on the timesheets, making for a promising weekend of racing ahead.

Sykes maintained the fastest time throughout the session, while Chaz Davies (Aruba.it Racing – Ducati) improved his time from the morning to finish second fastest. Alex Lowes (Yamaha Official WorldSBK Team) put in a last minute dash that saw him steal third on the timesheets.

Temperatures rose by midday and with extra rubber on the circuit, the conditions allowed for riders to set their fastest times, with the entire top ten improving their times from the morning session. Michael van der Mark (Honda World Superbike Team) was fourth, while Fores was the first Spaniard home continuing his good pace on Friday afternoon, to finish in fifth.

Sylvain Guintoli (Pata Yamaha Official WorldSBK Team) improved from the morning session, setting his fastest time in sixth to secure his entry to Tissot-Superpole 2. Nicky Hayden (Honda World Superbike Team) was seventh fastest in the combined times ahead of Leon Camier who set the eighth quickest time despite sliding out on turn 1 in the final minutes of the session. The MV Agusta Reparto Corse rider walked away in the top ten with his sights firmly on Saturday’s Tissot-Superpole 2 shoot-out.

Kawasaki Racing Team’s Jonathan Rea finished in ninth, while Davide Giugliano (Aruba.it Racing – Ducati) finished in tenth gaining a direct seeding to the Tissot-Superpole 2 qualifying session. Giugliano put in a solid performance after sitting out for most of FP2 with his recovering shoulder.

Tissot-Superpole 2 qualifying session will see Friday’s top ten battle it out for pole position on Saturday 15th of October at 10:55am local time (GMT+2) ahead of lights out for Race 1 at 13:00.