The dream team: The legendary Bimota brand and Alstare

Alstare formede a long-term partnership with Bimota brand and will compete in the EVO class in this year’s World Superbike Championship.

One spin-off of the newly formed long-term partnership between the legendary Bimota brand and Alstare – the most experienced team in World Superbikes - is the formation of Team BIMOTA ALSTARE RACING which will compete in the EVO class in this year’s World Superbike Championship on the formidable Bimota BB3 (*). 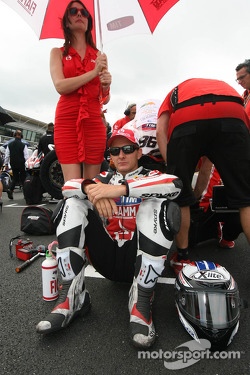 Engineer Acquaviva and his team at Bimota’s headquarters in Rimini have taken the bullet-proof BMW engine and married it to a beautifully designed chassis – designed and built in their own workshops - together with high level components in all areas. The result is a stunning looking bike, but one that hides a powerful beast within.

It will be Alstare’s job to develop this bike, with Bimota’s full co-operation, and turn it into a race winner and bring success on track to both companies.

The team will attack the EVO class with two riders – Italian Ayrton Badovini and Briton Christian Iddon. Ayrton is no stranger to Alstare, having ridden for them last year – in what proved to be a very challenging season. Now fully fit again, the Italian is comfortable with the team and ready to go to fight for glory right from the start.

Christian may well be new to the team, but there is a Bimota connection as his father rode a Bimota YB3 in the opening years of the championship. Christian comes from a successful background in motocross and supermoto and only switched to roadracing in 2008, but has begun to show his huge potential and is definitely one to watch for the future.

Ayrton Badovini: “The early part of this year is going to be a bit difficult because of our late start, but having said that, I’ve got such a good team backing me, I know we can do a nice job.

Although the BB3 is a new bike, I know the engine characteristics very well, from my two years with it in 2011 and 2012. It is a nice engine – fast, but very usable at all speeds. I don’t think we’re going to need to do a lot of work on the engine, which leaves us to concentrate of the rest of the package.

For me, this year is a lot about improving the bike and being ready for next year and in this respect I’m sure that we’ll do a good job. I’m really, really happy to be back with Alstare again and feel I am returning to a family I know well. The team is very professional. I learnt a lot from them last year and expect to learn more from them this year.

If things go well, and I see no reason they should not, my target is to develop the bike quickly and win the EVO title this year.”

Christian Iddon: “This is an amazing opportunity for me and I am very excited about the challenge ahead. Alstare is a famous team, with a big history and I am sure that I am going to learn a lot from them. They have loads of experience and that is going to help me, in what is going to be a very interesting season.

I have ridden a Superbike before, four rounds in the British Superbike Championship, but I know the new Bimota BB3 is going to be very different to what I am used to. Although we are starting from scratch, as long as we can find a good base setting we can progress quickly. I think many teams in this year’s championship are new and probably have not done much testing, so we’re going to be in the same boat as them. I don’t like to talk about targets, but I always set high goals for myself and this year will be no exception. I would like to think we’d be challenging the top guys in the EVO class well before the latter part of the season and I’d be disappointed if we weren’t.

I know I’ve got a great team behind me and I am looking forward to working with them and maybe surprising a few people.”

Ever since Alstare boss Francis Batta met Bimota’s new owners, Marco Chiancianesi and Daniele Longoni in EICMA last November, things started happening. The trio clicked straightaway and it wasn’t long before plans were being drawn up. The early plans were really not a lot to do with racing, but Bimota and Alstare’s success and history in World Superbikes was bound to lead to the formation of a race team.

Bimota have long been renowned for their esoteric and beautiful bikes. Ever since their creation, they have designed unique bikes, using hand-crafted components from their own workshops married to a variety of engines from different manufacturers. Ever since day one, their mission statement has all been about quality, regardless of cost and that still holds true to today. It seems therefore fitting that they have taken Alstare as a partner – as Alstare, in their own way, have also stood out from the rest of the field.

They may not have always had the best bikes, but they have always been one of the most professional teams in the paddock and have supported the World Superbike Championship longer than any other team. This new partnership marries two greats of motorcycling and a long and illustrious future beckons - both on the road and on the track.

Francis Batta’s new contact with Giuliano Rovelli is already yielding fruit. The final decisions are about to be concluded, but ParkinGo will become a partner and one of the team’s sponsors. As part of the deal, the team will be promoted via ParkinGo in their airport buildings.

Francis Batta: “I am very happy and excited about this long-term global project with Bimota – a famous and highly thought of brand. It all started at the EICMA last November, when I met the new owners Marco Chiancianesi and Daniele Longoni and immediately got on well with them. After that first meeting, I had a really good feeling about our prospects together. We knew our companies would complement each other in every way and such a symbiosis would be of enormous benefit all round. We both have enjoyed success in racing and putting our expertise together will be like a marriage made in heaven.

The BB3, designed by Engineer Acquaviva and his team in Rimini, is a fantastic bike and full of potential. We at Alstare are excited to help develop it, get it on the track and unleash the beast within. Ayrton was very unlucky with injuries last year and, realistically speaking, was never at 100%. Despite the difficulties we all faced, he managed a podium in very trying conditions and also took a superb Superpole in Germany – the first of his career.

I truly believe Ayrton’s potential is very high and I am sure that we’ll do things well together - not least because he fits the Alstare spirit perfectly. I followed Christian’s progress in Supersport last year and know that the guy is a genuine talent, with an ability to go far. His manager, Giuliano Rovelli, and I spoke a lot during the holidays and we seemed to be on the same wavelength. I will be collaborating with Giuliano and ParkinGo at some level and will give further information once it has all been decided.”

(*) * subject to approval of Homologation by FIM and its members

FIM: Changes to regulations for 2014

Imola ready to host the Acerbis Italian Round